Astronauts Glover and Hopkins began their spacewalk at 1256 GMT and emerged from the Quest airlock. They installed the final lithium-ion battery and adapter plate on the port 4 (P4) truss in the first hour of the spacewalk. Glover then took to the station’s robotic arm, Canadarm2, operated by astronaut Kate Rubins from inside the ISS, over to the starboard truss to replace a broken camera. Both astronauts then began work on fitting a new HD camera on the U.S. Destiny laboratory module. Hopkins then worked on replacing the camera system on the remote manipulator system on the Japanese robotic arm.

With time to spare, the spacewalking astronauts also completed some addition minor repairs at had been planned for later spacewalks including the removal of a bracket and the replacement of an airlock thermal cover magnet. At 1816 GMT, five hours twenty minutes into the spacewalk, the astronauts began repressurising the airlock. 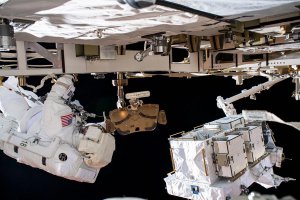 The astronauts’ main role on EVA-70 was to change out a battery. Courtesy|: NASA