There have been lots of comings and goings on the International Space Station (ISS) during April. The SpaceX Crew Dragon Reslience being flown as part of the  NASA Crew 1 mission – undocked from ISS from Harmony module’s forward docking port at 1030 GMT on 4 April 2021 as part of repositioning exercise. Commander Mike Hopkins, pilot Victor Glover, and mission specialists Soichi Noguchi and Shannon Walker were on board. After making a fly around of ISS, the spacecraft an automated docking of ISS’s Harmony zenith docking port at 1108 GMT.  This move frees up a port for a later Crew Dragon launch. 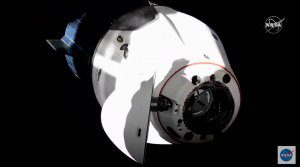 Crew Dragon Resilience on its continued Crew 1 mission comes in for its docking after its repositioning in April. Courtesy: NASA TV

Two days before the unmanned cargo craft Progress MS-14 made a burn of its engine at 1214 GMT on 2 April 2021 to raise itself and the ISS to which it was docked.