Arianespace has announced that it has been selected by exactEarth to launch the 110 kg ESAIL satellite using a Vega as part of the launcher’s Small Spacecraft Mission Service (SSMS) Proof of Concept (POC) flight from Kourou, French Guiana, in 2019. This final contract for the POC flight, means that it is now completely booked with 42 payloads onboard. 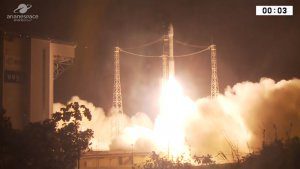 The Vega rocket lifts-off from Kourou carrying the PRISMA satellite to LEO. Courtesy of Arianespace

The ESAIL has an enhanced multiple antenna-receiver configuration for global detection of AIS messages and high-resolution spectrum capture, which will enable the demonstration of advanced future services such as VDES (VHF Data Exchange System) message reception.

After launch and commissioning, the ESAIL satellite will be integrated into exactEarth’s global constellation – which currently consists of more than 60 high-performance maritime monitoring payloads.

A month earlier Arianespace also announced that it was to launch the 150kg StriX-Alpha (StriX-α) Sythetic Aperture Radar (SAR) satellite for Synspective on a separate Vega launch from Kourou, French Guiana, in 2020. This would be the lead satellite of a constellation of 25.