At 1127 GMT on 5 May 2017, a GSLV-2 (CUSP) rocket launched the GSAT 9 communications satellite into orbit from the launch site at Sriharikota. GSAT 9 was claimed to be India’s first “all electric” spacecraft used in Geostationary Earth Orbit (GEO). However, according to ISRO’s own data the unified bipropellant system has 16 thruster configuration for station keeping and one 440N Liquid Apogee Motor (LAM) for orbit raising. The spacecraft does however have an electric propulsion system with four stationary plasma thrusters for station keeping. 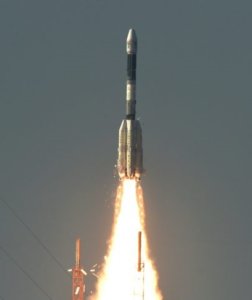 The satellite was originally going to be called the South Asian Association of Regional Cooperation (Saarc) communications satellite for telemedicine and education due to its communications role for the region. However its secondary name was changed to South Asia Satellte after Pakistan opted out of the project. The spacecraft is also carrying India’s Gagan navigation overlay payload.

In what was just the second Indian launch of the year, following on from a PSLV mission in February, a Read more