Comment: Orwell was right on two counts – the Internet of Things threatens our privacy just as politically correct puritanism threatens our freedom

Your correspondent writes this as one who has been accused of being dangerously right-wing by some on the left, and accused of being dangerously left-wing by some on the right.  It is always nice to be disliked by everyone!  Nevertheless, whether they come from the left or the right, some ideas have to be decried – even if – as we shall see, people should still be able to express them.

One of these ideas which should be opposed and which is currently being promoted and rolled out as the “next good thing” is the so-called “Internet of Things” (IoT). That is, under this IoT plan, all things will eventually be connected to the internet via smart sensors to allow their monitoring and their environment around them. Satellite companies, seeing a business opportunity, are now becoming actively engaged in using their technology to help relay these communications. This IoT technology could, admittedly, make the world more efficient place – whether that be for the better control of traffic or some other resource. But it comes at a cost: a dramatic loss of personal privacy.  In the same way that electricity companies now know whether you are at home or not via their monitoring of “Smart Meters”, so these new systems will be able to track you and monitor your behaviour, whatever you say or do, and wherever you go.

While George Orwell may have been about forty years premature in his dystopian book’s Nineteen Eighty-Four prediction of a constantly monitored life, and did not realise that it would be commercial entities rather than governments who would be the main drivers of the technology, nevertheless Orwell was basically right. Already, your location is now constantly being tracked via mobile/cell phone tracking and its GPS applications, and your views are now being actively monitored via the computer programmes we all use e.g. Facebook, Twitter, Google etc.  Still, at least, these systems can theoretically be turned off – even if this can sometimes be notoriously very difficult to do e.g. Google’s hard to switch off location tracking system.  As it is, soon even these “opt outs” will not be possible if “everything” becomes connected to a network via IoT. Soon with mass facial-recognition equipped CCTV surveillance, aided and abetted by IoT, there will be nowhere to hide, or be private – not even in your own home. A few years ago, the electronics firm Samsung was infamously found to be using cameras and microphones in its Smart TVs to record its customers – an early example of IoT spying – and there are fears that voice command Alexa and Siri-style active speakers might be able to do the same…another of Orwell’s predictions.

Even ahead of the mass roll-out of IoT, some Western firms are now putting RFID security chips into their employees’ bodies which could be used to monitor them at work (DT Comment: Your correspondent hopes that this was voluntarily done). And it is not just rogue commercial firms that are using electronic technology to track the proletariat. The governments of non-democratic nations such as China are actively installing massive numbers of CCTV cameras to track the public via mass facial or even walking gait recognition. And Western police forces are now starting to do the same.  Meanwhile, China is already awarding and docking “points” from citizen’s records according to what political views they have expressed in public or online. 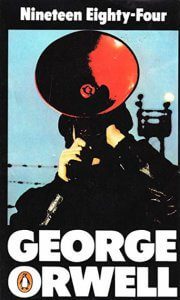 Even in Western Democracies, many of George Orwell’s predictions in his book Nineteen Eighty-Four are coming true. Courtesy: Penguin

However, at least we – in the democratic West –  can protest about all of this in a Free Speech society. Except that soon we may not.  New admittedly well-meaning laws have now banned certain forms of free speech declaring them as being  “hate crimes” – again a notion taken from Orwell’s Nineteen Eighty-Four.

For while venomous racist, sexist and bigoted statements should rightly be challenged, and even banned as “hate crimes” if they incite violence, the real problem nowadays is that the definition of the Orwellian-sounding “hate crime” is ever widening and now seems to cover anything which might be in any way hurtful. “A Frenchman was seriously hurt today when an Englishman made an unkind remark about the cut of his suit. The Englishman has now been arrested.” is a joking example of what news headlines might soon become.

As such, your correspondent mainly holds with the view attributed to Voltaire: “I disapprove of what you say, but I will defend to the death your right to say it.”   For it is, of course the very basis of freedom that free speech exists. The Freedom of Speech remains the ultimate defence against extremism, racism etc, whether from an omnipotent state, or from political, commercial or religious entities. Unfortunately, many don’t see it that way – preferring to ban what they do not like to hear.

And you thus might be arrested for uttering these “hate crimes” in your own home – if they are picked up via IoT microphones. It may only be a matter of time before criticism of state surveillance is also banned, probably on the grounds that it is against “public safety”.

Having said all that, of course, sometimes free speech itself is used against itself, usually via intimidation and bullying to bludgeon other individuals’ rights to free speech themselves. For example, scientists, academics and social commentators – even those who have bravely fought for human rights and equality in the past – are now afraid to express strong views due to an even stronger brand of “politically correct puritanism”. This is especially evident in the near Cultural Revolution-like decrying atmosphere that often pervades universities nowadays. Certain forms of research, expression and debate are now effectively banned – or more likely self-censored –  lest those doing them be accused of being racist, sexist, transphobic etc.

As a result, some are trying to resist. The BBC has revealed that a group of academics has now set up a new journal called the Journal of Controversial Ideas. This will allow authors to publish papers – however controversial – under anonymised pseudonyms. The idea is to free up intellectual discussion and ideas insulating them from the culture of fear and self-censorship. By the way, this will cause consternation amongst some keen to hide scientific differences due to race, religion, sexual orientation etc., even if such research might actually benefit these minority groups or even they themselves.

Your correspondent could write more here about how the warnings of George Orwell were right, but you see even this writer has partially “self-censored” himself out of fear of being accused of being whatever the mob is currently against.

One final thing.  It is true that, on a day-to-day basis, most people are more concerned about their families’ wellbeing (getting enough food, having a roof over their head, having access to education and healthcare etc) than they care about politics, privacy or the right of free speech. Unfortunately, they will only realise how much they loved their freedom and privacy once they are gone.

As such, this piece’s final advice to them and to you is: Oppose the Internet of Things (even if it is bad for the space business), and tamper with Freedom of Speech at your peril.