Russian cosmonauts Oleg Novitskiy and Pyotr Dubrov of Roscosmos began their first of up to eleven planned spacewalks when they opened the hatch of the Poisk docking compartment airlock of the ISS at 1441 GMT on 3 September. Their mission objective was to prepare the new Nauka multipurpose laboratory module by connecting power and ethernet cables to the new module and installing handrails enabling spacewalkers to manoeuvre around the module’s exterior more easily. 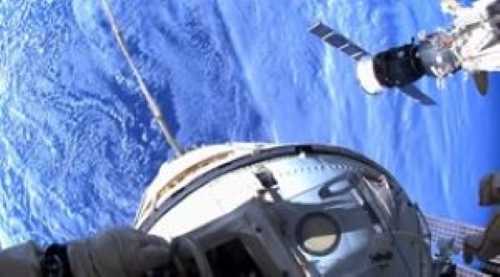 Preparing Nauka for operations is space, the cosmonauts attached several cable clamps and connected power cables between the new module and the Zarya module. Checks on the two electrical power cable systems from Zarya to Nauka were successful. The cosmonauts also partially installed the ethernet cable and one of three handrails.

The cosmonauts next spacewalk is scheduled for 9 September, in which they plan to install two additional handrails and complete the installation of the ethernet cable before taking imagery of the Russian segment of the ISS.

The EVA was concluded at 2235 GMT, after seven hours and 54 minutes.

This was the 10th EVA this year and the 242nd overall in support of ISS assembly, maintenance and upgrades. This was Cosmonauts Novitskiy and Dubrov’s second EVA, having previously worked on preparing the ISS for the undocking and disposal of the Pirs docking compartment in June.