At 2101 GMT on 27 November 2018, via UHF signals converted to X-band signals on two released Mars Cube One (MarCO A and B) data relay spacecraft and via the Deep Space Network on Earth, it was confirmed to NASA engineers, at the Jet Propulsion Lab in Pasadena, that the Mars InSight mission had landed successfully at 1944 GMT in the Elysium Planitia region of the planet Mars.

After a six-and-a-half-month passage from Earth, the Lockheed Martin-built lander, along with its protective heat shield, had slammed into the Martian atmosphere at a velocity of 5.5 km/s. After surviving temperatures of up to 1500 degrees Celsius during the atmospheric entry, a drogue parachute deployed to further slow the craft. 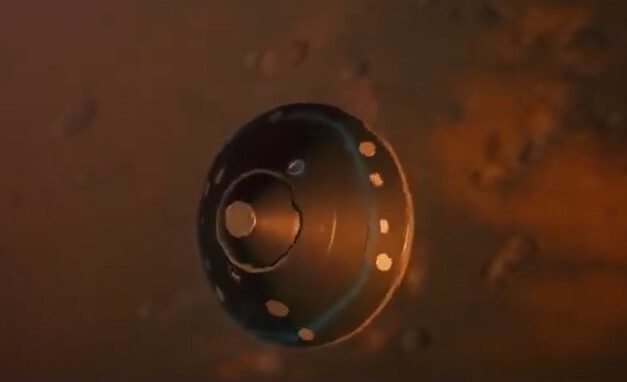 Three minutes later the heat shield was discarded. Two minutes after that, the final part of the descent involved the lander, with its legs deployed, being dropped from the top shell of the capsule to make a powered descent and landing after approximately a minute of descent.

Now safely landed, Mars InSight will carry out a series of scientific tests and observations on the interior of the planet using international hardware. The deployment of these instruments – a seismometer built by the French space agency CNES and a heat flow probe built by the German Aerospace Center (DLR) – will take place over the next few months. The lander also has a camera.

The overall Mars Insight mission is valued at US$1 billion including an equivalent to US$180 million being contributed by CNES and DLR.

The two released MarCO relay cubesats have carried on past Mars to fly into a heliocentric orbit.