The Canadian actor Douglas Rain has passed away at the age of 90. While he would have probably wanted to be more remembered for his Shakespearean stage roles in the 1950s, it will be his voice that will be most missed. For he played the disingenuously sympathetic voice of the murderous computer HAL 9000 in the Stanley Kubrick-directed sci-fi film 2001: A Space Odyssey (1968) – which really shows the transition from passive-aggressive to psychotically-aggressive. For he (or should that be it?) calmly tries, and mainly succeeds, in killing off all but one of the interplanetary spaceship’s mainly hibernating crew after finding out – via his ability to lipread – that two of the awake ones plan to shut him down after he exhibits some basic errors.

By the way, HAL’s erroneous stage is explained in sequels to be a clash between his underlying protocol not to conceal information and an order to conceal from the crew the fact that alien life has been discovered, and hence the reason for their mission to Jupiter (or to Saturn in the Arthur C. Clarke original book). 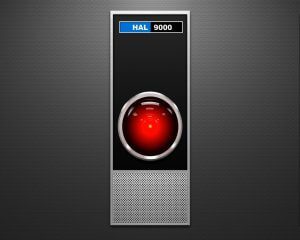 Comment by David Todd: Hal’s plea: “Don’t do that Dave,” has a special meaning for this writer – also called Dave – as (spoiler alert!) HAL’s wires – or rather his higher function boards – are finally pulled out by his human crewmate. One also wonders here if Douglas Rain’s last words, like HAL’s, were a  rendition of “Daisy Daisy” before he died.

We salute Douglas Rain for this memorable vocal performance and give our condolences to his family friends.

We at Seradata also pay tribute to Marvel Comics’ founder Stan Lee who has passed away at the age of 95. He co-created many of the superheroes that now adorn the cinema screen whether that be the Incredible Hulk, Iron Man, Spider Man or, most recently, Black Panther.  Our condolences go to his family and friends.

We give a note of thanks and goodbye to former BBC News reader Richard Baker. He has passed away at the age of 93.  Given his received pronunciation training, Baker was well spoken – and he was well spoken of – with many of his former colleagues paying tribute to him.  Baker’s career as a news announcer lasted over four decades from the 1950s to the 1980s. After this he took up presenting BBC classical music programmes including The Proms.  Richard Baker had an interest in amateur dramatics and did narrations for animated children’s programmes including Mary, Mungo and Midge.  Baker previously served in the Royal Navy as an RNVR officer (the RNVR was known as the “Wavy Navy” due to their cuff insignia) on Atlantic and Arctic convoy duty during the war, and remained in the service for decades after the war ended – only giving up with the rank of Lieutenant Commander when he realised that many Admirals were younger than him.

Two well-known film directors Nick Roeg and Bernardo Bertolucci have passed away at the ages of 90 and 77 respectively.

The influential British director Nick Roeg became famous during the 1970s for his movies which usually involved lovely visual imagery, sensual nudity, and some very strange story lines. His credits included the sci-fi morality tale The Man who Fell to Earth (1976), the gangster-rock hippy culture clash Performance (1970), and the sensual but foreboding horror Don’t Look Now (1973). Roeg’s beautifully shot and weirdly moving film Walkabout (1971) is an example of his output. Set in the Australian outback, its strange survivalist storyline involving a young boy and his teenage sister, is blended with the sadder elements (spoiler alert) of abandonment, unrequited love and suicide. Of course, given that Nick Roeg was directing, one scene has the then young actress Jenny Agutter’s admittedly beautiful, unadorned female form swimming sensuously in a natural pool. For all his work, we give our salute to Nick Roeg and our condolences to his family and friends.

Italian film director Bernardo Bertolucci similarly attracted fame for his use of beautiful visuals and yet some notoriety over his choice of scenes. While Bertolucci’s films gained initial recognition in Italy, he attracted world notoriety and criticism for his film Last Tango in Paris (1972) with its controversial forced sexual act scene involving butter. Bertolucci’s favourite themes of sex and innocence – along with his Marxist revolutionary viewpoint – again pervaded some of his later works, including the 1968 Paris protests-set The Dreamers (2003), and more subtly, in the coming-of-age movie Stealing Beauty (1996).

There was (thankfully) much less sex in his Chinese history retelling in The Last Emperor (1987) which is now regarded as Bertolucci’s masterpiece. It won him an Oscar for best director and one for best picture, and also won seven others in other categories. We give our salute to Bernardo Bertolucci for, at least, some of his work, and our condolences to his family and friends.

…as we also salute Baroness Trumpington

It is also a sad goodbye to the fun and feisty character Baroness Trumpington who has passed away at the grand old age of 96. She had a fascinating life which included being a well-born socialite who later became a multi-lingual translating cypher clerk at the codebreaking installation Station X (Bletchley Park) during World War II. In the years after the war she became a distinguished Conservative Party parliamentarian, famously putting two fingers up in a V-sign at Lord King during one debate when he inadvertently insulted her about her age. We give our thanks for her life, and our condolences to Baroness Trumpington’s family and friends.