How did gliders help win D-Day battle and will they ever fly on Mars?

Every now and then interplanetary missions have been proposed which are both exciting and innovative and yet, regretfully, still do not make the cut for funding.  One of these was an ambitious plan to fly a rocket-boosted glider on Mars.  While that is now unlikely to happen, gliders have helped shape human history – as they did on D-Day on 6 June 1944. 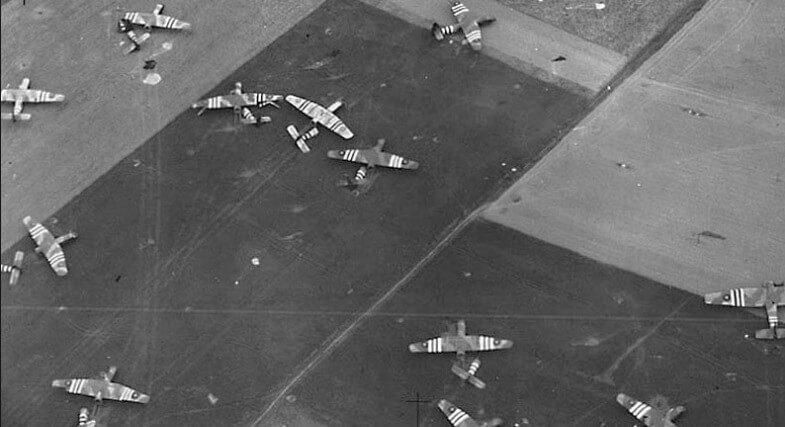 Horsa gliders and a Hamilcar glider (furthest right) cover the D-Day Landing Zone N near Ranville (and the Pegasus and Orne Bridges). Courtesy: IWM via Wikipedia

Despite NASA winning overwhelming plaudits for its innovative landing and operation of its Mars Curiousity Rover, it went back to a more conservative approach for its next Mars mission and chose the the Mars Atmosphere and Volatile EvolutioN (MAVEN) Mars orbiter which is due to be launched end of the year. In selecting this mission, NASA passed up the opportunity to execute an ambitious plan to fly a rocket-boosted glider though the atmosphere of the planet Mars dubbed Aerial Regional-scale Environmental Survey (ARES).

While hypersonic gliders for planetary entry have long been considered in relation to Mars exploration (unlike for Earth entry, the heating from Mars atmosperhic entry  at interplanetary speeds can be dealt with), other scientists were more interested in flying in Martian atmosphere at a more sedate speeds using gliders and powered aircraft.

Low speed gliders and sail planes, have of course, been used seriously for pilot training and sport purposes since the 1920s and they have had some famous aficionados.  Test pilot and moonwalking astronaut, Neil Armstrong was also a prize winning glider pilot in his spare time.

Of course, gilders have not just been used for peaceful purposes. During World War 2, medium and heavy lift gliders were developed to carry troops and equipment behind eney lines during military operations and invasions, most famously used at Crete by the Germans in 1941 and later by British and American forces in the D-Day invasion of Normandy on 6 June 1944.

Most famously glider-borne troops were the first to invade France on that day as just after midnight Major John Howard and his British Army raiding party used a small number of Horsa gliders to make silent approach before their successful attempt to capture two key bridges over the Orne River and Caen Canal (the latter being the famous Pegasus Bridge).  Blocking these bridges meant that German Panzer (tank) forces would have to take a lengthy detour to make a large attack on the landing areas.

The were other ways that gliders helped win the battle. While Waco CG-4A and Horsa gliders were also used to land US troops in support of the Omaha and Utah beach landings further West, it was the follow up Operation Mallard arrival of the British 3rd Airborne division in Horsa and larger Hamilcar gliders which was responsible for a surprising key turning point in the D-Day battle.

The German 192nd Panzergrenadiers (supported by a few tanks of 22nd Panzer regiment) somehow managed to fight their way through to the Normandy beachhead between the British “Sword”  and Canadian “Juno” landing beaches, splitting up the two landings. These breakthrough forces, which had survived a mauling by RAF Typhoon fighter bombers and British ground forces, were waiting for more armour support from the German 21st Panzer Division.  If they had arrived then the Germans might have been able to roll up the entire D-Day landing sequence.

However, in the still light early evening, the last wave of Airspeed Horsa and General Aircraft Hamilcar gliders of the British 6th Airborne Division silently swept over the commanders of the German breakthrough forces. They became fearful that they might get cut off by glider-borne soldiers landing behind them and ordered a retreat.  In effect, the gliders’ arrival had put them off staying and stopped Nazi German forces exploiting their breakthrough.

Actually the Germans should have realised that lightly-armed allied airborne troops should not have been able to hold off massed Panzer IV  tank attacks, and those from the even more fearsome Tiger tank for long, as was later proven in the disastrous Arnhem battle some months later.

Still the British airborne forces on D-Day did have a few 6-pounder and 17-pounder anti-aircraft guns and some pack howitzers which had been carried in on the Horsa and Hamilcar gliders respectively, plus some small Tetrarch tanks (even if they initially got a bit tangled up by disgarded parachutes). In the event these glider-borne guns and light tanks did just about manage to hold off smaller elements of German panzers from later recapturing the two key bridges until the allies own sea-landed armour arrived and thus allowed a permanent foothold to be maintained.  The subsequent Normandy campaign was a bloody two month slog, but it did so much to destroy the most effective Nazi forces, allowing Paris to be liberated shortly afterwards.

Earlier in the War, Nazi Germany had itself earlier examined using medium and heavy lift gliders for its own planned but never executed invasion of Britain.  It belatedly came up with the Messerscmitt Me 321 Gigant – a design similar to the British Hamilcar heavy glider -but which was later converted into the more effective six-engine powered Messerschmitt Me 323  transport aircraft.  While it lost out to the conventional-looking Me 321 Gigant in the eventual selection, the Gigant’s main competitor, the Junkers Ju 322 Mammut (Mammoth) was an even larger glider of 62m wingspan.  This was the largest glider ever devised – albeit that the US Space Shuttle was heavier – and, of course, in being hypersonic, faster.

While the Mammut had structural problems which prevented its eventual deployment, its revolutionary wing-body configuration was very advanced for its day and its planform is very reminscent of the ARES Mars glider configuration.  The unmanned ARES is, of course, much very smaller at around one tenth of the Mammut’s wingspan.

The idea was for ARES to be carried folded up inside a planetary entry vehIcle before unfolding from its protective aeroshell in flight.    From there, with a rocket boost (officially the propulsion system had not been settled) a flight of one hour would be made with the craft making observations and measurements of the planet’s atmosphere and magnetic field, transmitting them via a relay spacecraft as it went.

While the ARES Mars rocket-boosted glider came closest of all the proposed Mars glider and aircraft designs to come to fruition as part of NASA’s Mars Scout Programme, in the end, as already mentioned it sadly lost out to the more conventional MAVEN orbiter mission for selection. Nevertheless, Mars gliders continue to have a major following and have been seriously proposed to NASA for missions to Mars since 1999. Their time may soon come.

Proponents of Mars gliders and powered aircraft point out that while Mars has a very thin atmosphere, it is made mostly of heavy-molecular weight carbon dioxide. That is, at any given pressure, carbon dioxide is denser than the air on Earth.  Aerodynamicists preduct that the low Reynolds number for such a passage through the Martian atmosphere would promote laminar flow over the wings. These factors increase a wing’s lift. The low gravity on Mars, also reduces the wing loading on an aircraft, allowing it to fly with less lift.

Apart from rocket boosted gliders, aircraft using very large specially designed propellers have also been proposed for Mars aircraft to use.  Now that solar powered heavier-than-air aircraft such as the ultra-long range Solar Impulse craft are flying in Earth’s atmosphere, it can be envisaged that a similar design could one day work in the atmosphere of another planet for flights lasting very much longer than the ARES’ endurance of only one hour.

So while ARES was not selected last time round, it, and its powered successors, may yet have a chance to soar through the skies of Mars.  We look forward to that day.

For more information on the ARES plan go here: http://marsairplane.larc.nasa.gov/platform.html

Post Script in June 2019: In an echo of the way that gliders were eventually usurped in the rough area troop landing role by helicopters, the first airborne vehicle on Mars is now set to be a NASA drone helicopter rather than a glider.

Ares I is not dead, it’s just a test flight zombie

Will Ares be part of the flexible path?

No not that Ares but the Aerial Regional-scale Environmental Surveyor, a 6.71m (22ft) wingspan aircraft that would fly through the Read more

Ares’ future: What does ITT know?

What does ITT know? Is Ares I crew launch vehicle going to get solid rocket boosters? I am guessing that Read more