On a launch dubbed “They go up so fast” Rocket Lab successfully launched one of its Electron launch vehicles at 2230 GMT on 22 March from Mahia Peninsula, New Zealand. The satellites carried on the launch were Blacksky Global-9,  Centauri III, Gunsmoke-J 1, Myriota 7, RAAF M2 A, RAAF M2 B (initially deployed joined together but will separate later) and Veery Hatchling. Pathstone initially deployed five of these satellites into a 550km orbit before manoeuvring down to 450km for the final deployment. 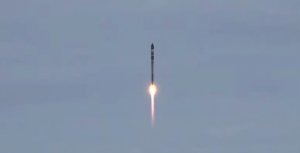 Rocket Lab’s Electron on “They go up so fast” launch. Courtesy: Rocket Lab

Pathstone was both the the kick stage for all six co-payloads and then became a spacecraft in its own right as the “Photon Test Satellite”.