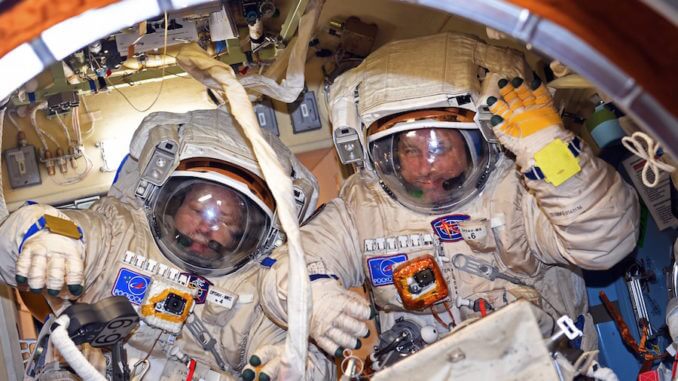 Suited up in their Orlan space suites, Russian cosmonauts Alexander Misurkin and Anton Shkaplerov made a spacewalk from the International Space Station (ISS) to install an upgraded electronics box on a high-gain communications antenna on Zvezda service module. The old Lira electronics box was released into orbit behind the station and should eventually re-enter the Earth’s atmosphere.

After being depressurised, the Pirs module airlock had its hatch opened at 1534 GMT. The work outside took longer than expected and the hatch was closed at 2347 GMT after the 8 hour 13 minute spacewalk. This was reported to be the longest ever Russian spacewalk.

Alexander Misurkin and Anton Shkaplerov are ready to go outside in their Orlan space suits. Courtesy: Roscosmos