The launch of the Progress MS-07 on the ISS-68P mission to resupply the International Space Station (ISS) ended in a no-go when a launch abort was triggered in the final minute before lift off on 12 October. The launch had been due to take place at 0932:03 GMT but failed to take place.  In fact, it was a failure to disconnect from the tower’s power supply which prevented the rocket from switching to internal power.  The second of two retractable arm with associated umbilical connections was seen not to detach as it should have at its normal time of 15 seconds before lift off.

The flight eventually took place at 0847 GMT on 14 October 2017. The original plan was to use the “superfast” three and a half hour, two orbit approach and rendezvous technique with the ISS after the launch. This is even faster than the six hour “fast” approach perfected by past Progress unmanned and Soyuz manned missions. However, due to the new launch date and launch time, the mission instead had to use the “normal” two day long approach to the ISS.

Update on 17 October 2017: The Progress craft completed its rendezvous with the ISS at 1104 GMT on 16 October by docking with the Pirs module of the station. 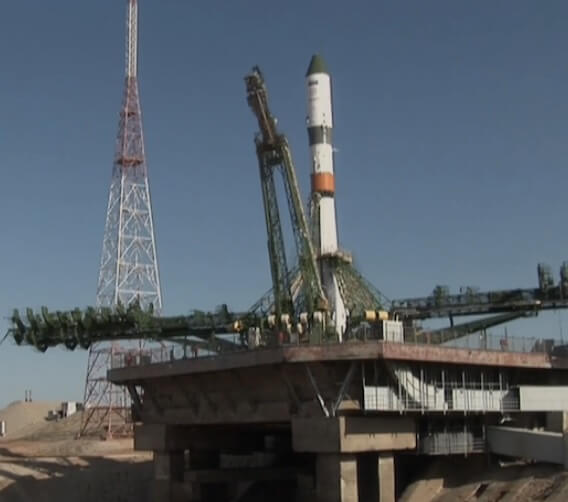 The Progess MS-07 and its Soyuz 2-1a rocket remained attached to the pad. Courtesy: Tsenki