SpaceX launched a Falcon 9 with the first privately crewed mission to the ISS from the Kennedy Space Centre, USA, at 1517 GMT on 8 April. The first stage of the Falcon 9 (B1062 on its fifth flight) successfully landed on the drone barge “A Shortfall of Gravitas” stationed downrange in the Atlantic Ocean.

Aboard the Crew Dragon Endeavour capsule (on its third flight) on Axiom Mission 1 (AX-1) was US Navy Captain Michael López-Alegría, a retired NASA astronaut and president of the Commercial SpaceFlight Federation, who acted as commander of the crew. The four-man team also included pilot Larry Connor, founder of a real estate investment company, and Mission Specialists Mark Pathy and Eytan Stibbe. Pathy, chief executive of investment and financing firm Marvik, is the 12th Canadian to go into space while Stibbe, an investor and former Israeli Air Force pilot, is the just second Israeli to make the journey into orbit.

Although paying customers have previously visited the ISS, the latest venture was noted for carrying the first all-private crew. 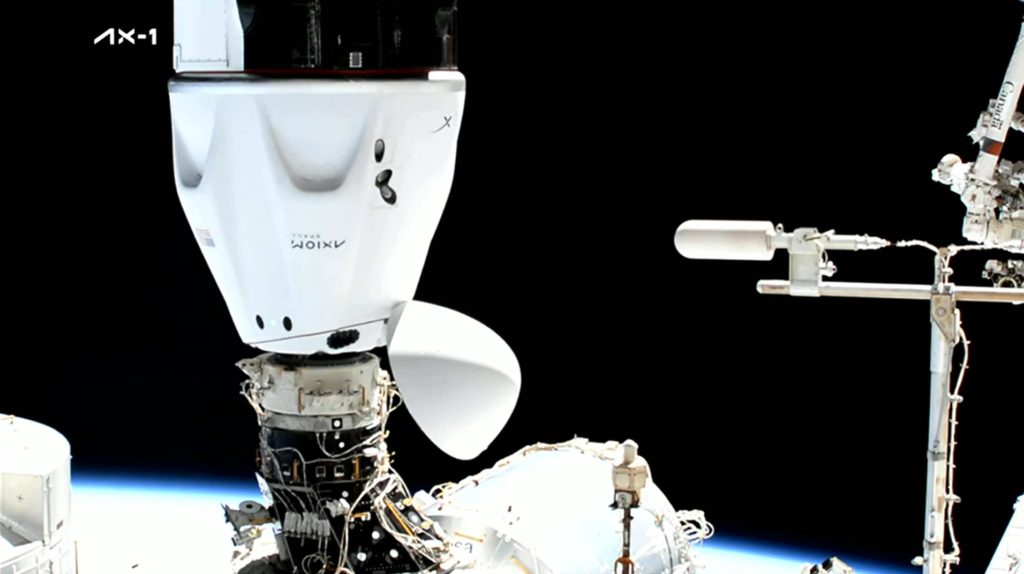 The successfully docked Axiom-1 Crew Dragon. The private astronauts will work on outreach activities, scientific research, and commercial activities, according to NASA. Courtesy: SpaceX via YouTube

AX-1 successfully docked to the node-2 zenith (space facing) port of the Harmony module at 1229 GMT on 9 April. Docking was delayed for 45 minutes due to issues with the video uplink to the ISS. The mission was expected to last 10 days, with the crew spending eight days on the ISS. However, primarily due to poor weather at the splashdown locations, the crew spent 17 days in space before re-entry and landing could be achieved.

AX-1 undocked from the Node-2 zenith port of the Harmony module on the ISS on 25 April at 0110 GMT. Later on the same day the AX-1 capsule (Crew Dragon Endeavour) re-entered. The four main chutes were successfully deployed slowing AX-1 down to a comfortable 15 mph at splashdown at 1706 GMT on 25 April in the Atlantic Ocean off the coast of Jacksonville, Florida. 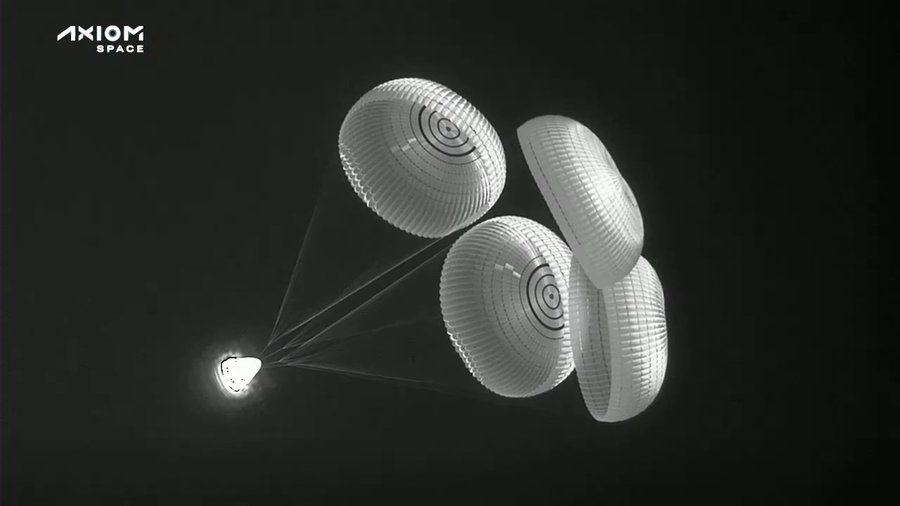 The successful return of this commercial mission provides the green light for the next astronaut crew trip to the ISS, this time for NASA. The Crew-4 mission is already set to launch on Freedom, another Crew Dragon spacecraft, on April 27, less than 48 hours after the splashdown of AX-1.

Comment by Farah Ghouri: The mission is a milestone for the development of a commercial space station and will be a forerunner to more private missions to the ISS, including three other Axiom missions.

Postscript: In a separate event, on 23 April at approximately 1324 GMT, Progress MS-18, which is docked to the ISS Zvezda module, fired its engines for 10 minutes and 57 seconds to boost the orbit of the ISS by 1.8 km. This was to avoid debris and at the same time optimise phasing for future visiting vehicles arriving at the ISS.

Jonathan Freeman and Derek Goddard contributed to this story.