SpaceX launched its Transporter-2 rideshare mission from Space Launch Complex 40 at Cape Canaveral Space Force Station, Florida, at 1931 GMT, 30 June. It carried 88 payloads into low Earth orbit using a Falcon 9 rocket with a first stage that had previously been used to launch a GPS III satellite (SV 03), Turksat 5A and five Starlink missions. As an additional sign of growing launch vehicle reusability, it also employed a pre-used fairing, one half of which had flown on the Transporter-1 and a Starlink mission, the other on the SAOCOM 1B launch and another Starlink mission. 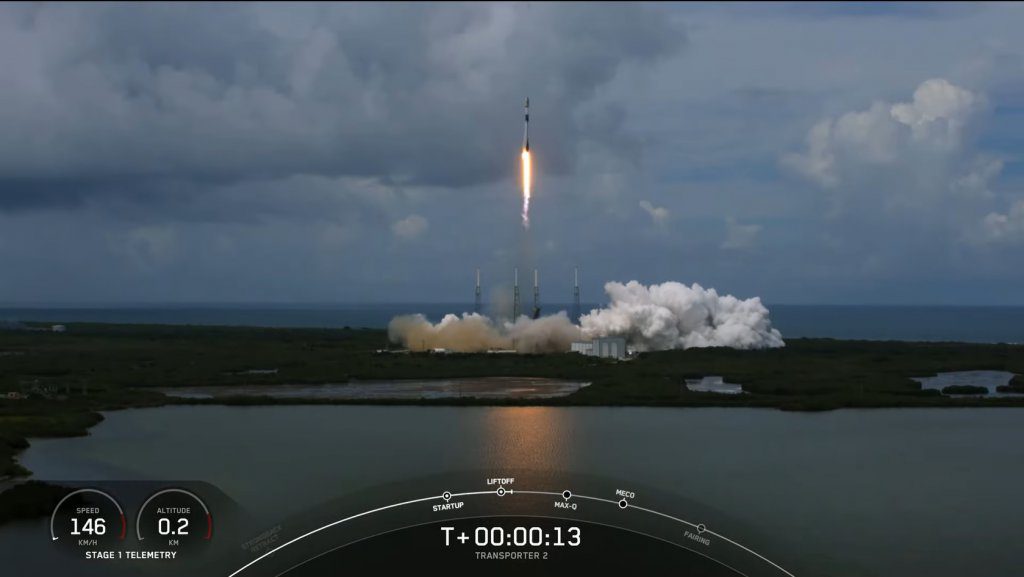 The Falcon 9 rocket lifting-off carrying its multiple payloads into orbit. Courtesy of SpaceX

The Transporter-2 mission carried 85 commercial and government spacecraft (including CubeSats, microsats and orbital transfer vehicles) and three Starlink satellites. Although this totalled fewer spacecraft than the Transporter-1 mission, which carried 143 satellites, the mass to orbit was greater. Deployment from a 550 km sun-synchronous orbit began around 58 minutes after launch and continued over a period of about half an hour.

Apart from the reusability factor, the mission was newsworthy in that it included radar satellites from three competing companies (Capella, Iceye and Umbra), two companies building constellations for radio-frequency tracking services (HawkEye 360 and Kleos) and two developing internet-of-things constellations (Astrocast and Swarm). Although they are all relatively small spacecraft, the fact that competitors can share the same launch is a game-changer in an industry that, not that long ago, was based on the premise of ‘one launch, one customer’.

The Transporter-2 launch was also notable as SpaceX’s 20th Falcon 9 mission of the year. Some years ago, the company promised to increase the launch rate to levels many thought were simply ‘pie in the sky’, but SpaceX succeeded in conducting 21 orbital launches in 2018 and a record 26 in 2020. With half of 2021 still to go, it seems likely that a new company record will be set.