Scottish small satellite manufacture Clyde Space has received an order from AIS ship tracking payload specialist SRT Marine Systems to build six satellites for its new “Ocean Scan” ship tracking constellation. The first six spacecraft will be launched to polar orbit and will be ready to start their service in 2019. The firm expects to add to the constellation with more spacecraft, selling its data to national defence and police forces.

Meanwhile, in a closely related field of satellite tracking, the Danish small spacecraft manufacturer and operator has GOMSpace has received an order for 100 cubesat-class spacecraft from AISTech which is planning a constellation to track assets and aircraft, offer basic two-way communications and to allow thermal imaging. The contract is valued at US$14.7 million (€12.5 million). Initial satellites in the constellation will be launched in early 2018.

Comment by David Todd: Ship-tracking is especially relevant in the security and maritime awareness field. Apart from trying to clamp down on the problems of ship piracy and smuggling (including the smuggling of people), governments are aware of the danger of a sneak attack by a modern variation of a “Q-ship”. Q-ships were originally devised in World War I to fool German U-boats into attacking them in a surface gun action(torpedoes were much more valuable than shells for the submarine’s surface gun) and then defeating them with their own hidden guns. In this case, a modern day Q-ship – that is a cargo ship armed with hidden cruise missiles instead of guns – could sail close enough to a country to launch a near no-notice nuclear or conventional attack.

In other words, it would allow navies to track normal ship and small vessel traffic, while investigating those ships without AIS signals and accreditation. 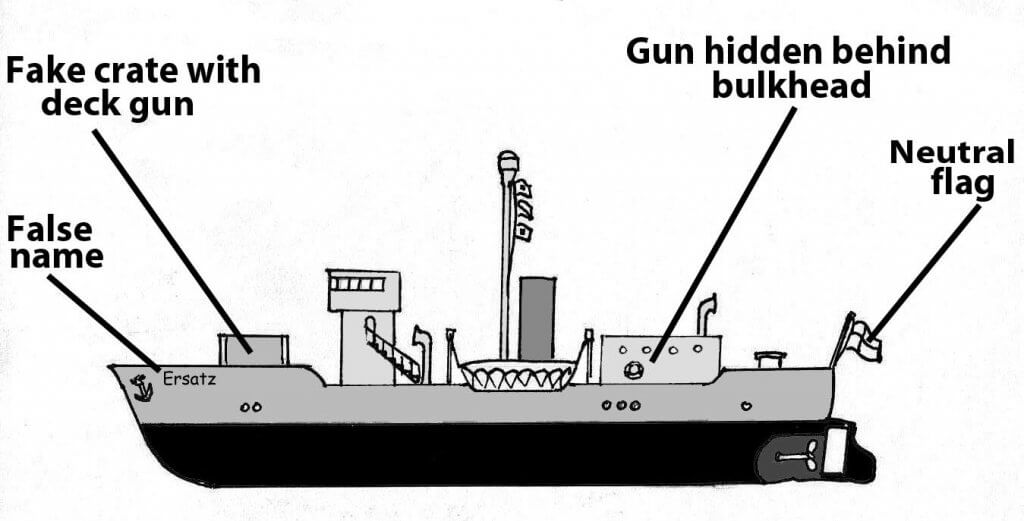 “Q-ships” had hidden guns to be wheeled out when the enemy approached. Modern day versions would have hidden missiles. Courtesy: angelfire.com