The US military is now under orders from the US Congress to end the use of any commercial satellites that have been launched by Russian or Russian-sourced rockets. The ban comes into play from 2023 onwards and raises doubts over the commercial viability of the Proton rocket offered by International Launch Services (ILS), the commercial marketing arm of Khrunichev, after that date. The Soyuz rocket operated by Arianespace is also unlikely to continue launching. The US Congress prohibition, which will be signed into law by President Trump, stopped short of making the ban immediate as was proposed by the US Senate. 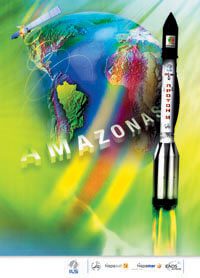 While commercial satellites are theoretically immune from such a ban, many are used by the US military to back up its communications assets with capacity bought on the open market. In other words, most commercial satellite operators will want to continue to have access to this market and so will no longer want to use these rockets.

Arianespace is expected to be less affected by the ban as the Soyuz was being replaced anyway by its Vega-C and new modular Ariane 6 launch vehicle. The satellite constellation OneWeb currently has launch reservations on Soyuz, but these should have taken place by the time the ban is enforced.  However, the news will be grim reading for ILS, which was planning a fresh assault on the commercial launch market using its new cheaper-to-fly “cut down” three-stage version of Proton, called the Proton Medium. It has had its first stage stretched to compensate for the removal of the second stage and would have a cost low enough to compete with the SpaceX Falcon 9.

Comment by David Todd:  You have to feel sorry for ILS and Khrunichev. Not only have they returned the Proton M to reliable use, but in the new Proton Medium they have come up with an imaginative and economically viable response to SpaceX’s market domination via the reusable Falcon 9. Now all their good work looks set to be for nothing.

Russia under Vladimir Putin is increasingly seen as a “pariah state”. This is due to its annexation of the Crimea and other parts of Ukraine, and before that parts of Georgia, under the guise of protecting Russian minorities living there; the Russian air force’s bombing of civilians in cities during the Syrian civil war; its interference in the democratic politics of other nations via internet propaganda (allegedly including the US Presidential election); and for the political imprisonment and alleged assassinations of Russian government opponents. Some even compare Russian behaviour with that of Nazi Germany in the 1930s. (During that period Germany made an Anschluss (“joining”) with Austria, followed by annexations Czechoslovakia and Poland under the guise of protecting German-speaking minorities there. Before that, it had interfered with those nations’ democracies, having previously taken down its own with its show trials, political imprisonments, executions and assassinations. Germany’s Condor Legion air force also bombed civilians in cities during the Spanish Civil War, most infamously at Guernica.)

Some final parallels: both Hitler and Putin have had youth organisations named after them, and both are/were noted as being famously good to their dogs (well – until Hitler tested his poison out on his).

Post script: In a major speech made on foreign policy at the Lord Mayor’s banquet in the Guildhall, London, UK Prime Minister Theresa May accused the Putin government of “meddling” in democratic elections, mounting cyber attacks and publishing fake news stories and propaganda to “undermine free societies”.  May described this activity as the “weaponisation of information”.

Of course, as it attempts to sow the seeds of fake news, sometimes Russian incompetence catches it out. There were some embarrassed faces at the Russian Ministry of Defence after it was found that the infra-red aerial image, which it had been using as “irrefutable proof” that US armed forces were helping IS terrorists, was actually sourced from the commercially available video game, “AC-130 Gunship Simulator: Special Ops Squadron”.

Update on 21 November 2017:  As a result of the controversial media tactics of the Russian government, including some cleverly subtle misinformation in its news stories, Google has decided to “derank” the Kremlin’s propaganda media outlets to the West: RT (Russia Today) and Sputnik News.