For the third time in less than a month, the European Spaceport at Kourou, French Guiana, played host to an launch by European launch provider, Arianespace. At 2345 GMT, 1 June, an Ariane 5 ECA heavy-lift rocket, lifted off from the ELA-3 pad at Kourou carrying the 6,418 kg VIASAT-2 and 3,551 kg EUTELSAT 172B spacecraft into Geostationary Transfer Orbit (GTO). This launch marked the 79th straight success for the vehicle and also increased its all-time payload-to-GTO record to 10,865 kg (including SLYDA adapter). This payload mass record also marks a 1,500 kg performance gain for the Ariane 5 ECA since its initial launch 2002. 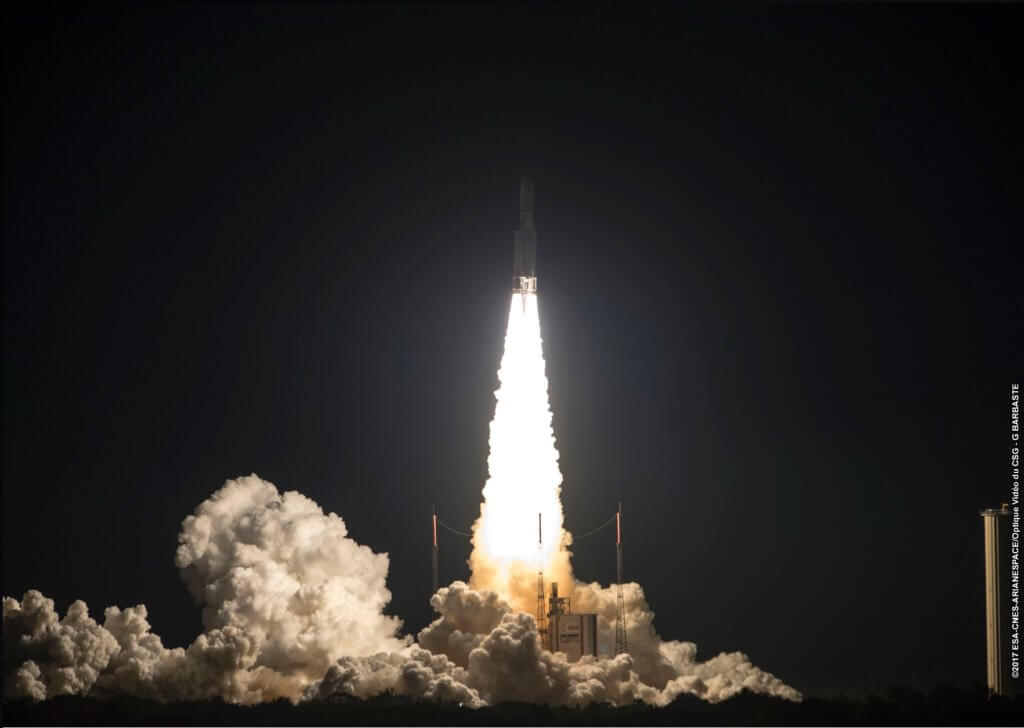 Ariane 5 lifts off from Kourou, carrying VIASAT-2 and EUTELSAT 172B. Courtesy of Arianespace

Riding in the Upper Berth of the Ariane 5, was the 6,418 kg VIASAT-2, built by Boeing of El Segundo, California, for US Fixed Service Satellite (FSS) operator Viasat Inc. The spacecraft utilises the Boeing 702HP platform, and is reported to be able to provide nearly twice as much capacity than the already in-orbit VIASAT-1. This is the first time ViaSat has contracted with Arianespace for a launch.

Occupying the Lower Berth for long-time customer – and part of the “Big Four” global FSS operators – Eutelsat SA, is the 3,551 kg EUTELSAT 172B. This spacecraft is an all-electric model, and the first example of Airbus Defence and Space’s E3000 EOR (Electric Orbit Raising) electric satellite platform.

With this sixth launch of the year for Arianespace, the company has now made up for the inconveniences caused by striking French Guianan workers during March and April. Arianespace is targeting six more launches during the second half of the year (4 Ariane 5 and 2 Vega) for a total of 12 throughout the year. In aid of this goal, the next launch for the company is an Ariane 5 expected on 28 June.