For over 40 years, Seradata (and its predecessors) have been tracking and logging satellite reliability events. The satellites’ life cycle is recorded from its order (“its conception”), its construction (“its gestation”) including any significant manufacturing errors (e.g. being dropped etc), its launch and final positioning (“its birth”), its and ‘in-orbit’ life meaning from final position onwards until its eventual retirement/re-entry/graveyard (“its death”). Launch phase satellite anomalies/failures are causally assigned either to the launch vehicle or the spacecraft (satellite). In-orbit anomalies/retirements due to failure are categorised by severity and by subsystem/equipment involved. An ‘Underlying Cause’ category is also allocated.

Seradata analysts evaluate each event to quantify the effect on the mission or the satellite’s lifespan or mission capacity as a percentage loss.  For example, if a communications satellite lost half its communications payload, then this would result in a 50 per cent loss of capacity and hence a loss of half of its overall capability.  Similarly, a loss of half the minimum design life would result in a loss of half the satellite’s capability. This analysis enables the SpaceTrak software to calculate bus (platform) reliability rates and trend curves. Uniquely, SpaceTrak data also records insurance claims and paid out losses in terms of dollar values and per cent of insured value.

The chart below has been produced by SpaceTrak for a typical set of GEO satellites using (mainly) Western-built bus designs. The blue bars show the number of satellites entering each year of life alive, the orange line shows the failure rate for each year.

This chart failure rate includes ‘Serious’ satellite anomalies: Class I (Total loss of mission/spacecraft) or Class II (anomalies involving a permanent degradation of capability (lifespan and/or mission capacity)). The failure rate follows the classic ‘bath-tub’ reliability curve. As predicted, many satellites experience ‘infant mortality’ in year one of operations. Mid-life is the phase showing the highest reliability, although the data shows mini-peaks in year’s six and 12 hinting at “midlife crises” for some bus types. Some bus/platform designs for example have had generic issues e.g. with solar array designs that have taken some years to become apparent.

Most GEO satellites have typical minimum design lives of 15 years. Normally satellites are voluntarily retired at or soon after this point, i.e. before failures due to old age cause the upward shape of the “bathtub” curve. However, it is apparent that by years 14 and 15 reliability is already deteriorating as ‘old age’ failures begin to kick in. While not shown on this chart, the database also includes details of satellite anomalies and failures for those satellites that are operated beyond this typical 15-year minimum design life. 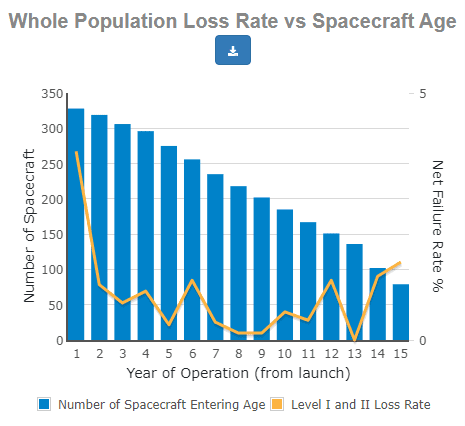 While limited by elements of commercial secrecy and military security, nevertheless Seradata collects details of serious anomalies from public domain and industry sources.  Seradata has also managed to obtain details of virtually all satellite anomalies which resulted in an insurance claim.

We acknowledge that for some bus/platforms we may be missing some uninsured in-orbit anomalies and thus the actual reliability could be worse than that presented.  By the way, it should never be better.

Seradata assigns of satellite anomalies to subsystems e.g. batteries, thrusters, solar arrays, or satellite payloads allowing a determination of those likely to cause failure for defined a set of satellites.

Seradata is also in the process adding actual equipment types which should allow even more detailed queries and analyses.

With the increased awareness of the importance of the space environment and space debris, Seradata notes those technical failures which might have a solar, or micrometeoroid, or space debris cause. Such anomalies and failures might be a gradual in nature, such as a slow time related solar radiation exposure related degradation issue, or a result of a single environmental event such as a solar storm or a debris strike.  With respect to debris or micrometeoroid strikes, given that most satellites do not have monitoring cameras or microphones, to record these events, we are mainly reliant on operators’ analysis of their own telemetry, and on external observers commenting on unusual events or tracked movements.

For more information about SpaceTrak database and how to subscribe, go to seradata.com/spacetrak. If you wish to arrange an online demonstration please contact us by email: info@seradata.com.