Seradata’s SpaceTrak launch database details all orbital attempts back to Sputnik in 1957 together with payloads (satellites). SpaceTrak also covers suborbital launches related to human spaceflight and orbit capable launch vehicles (e.g. Vega, New Sheppard and SpaceShipTwo). The relational database links the launch payloads (spacecraft/satellites), to the launch, including launch site, and to the launch vehicle. The launch outcome for each payload is recorded.

Satellite launch prices are a key element of the dataset. Seradata researches the launch price for primary payloads and for the total launch. Where possible, we record actual launch contract prices, but where not available, we may provide an estimate, flagged as such.

Launch orders and bookings are logged together with the planned launch date or window. Launch delays are tracked.

Technical details for each launch vehicle are available including dimensions, stages, engines, and payload capability (mass to LEO, MEO, GEO, etc). For reusable vehicles, stage reuse is noted together with the serial numbers.

The chart below has been produced from SpaceTrak and shows all orbital launch attempts since 2020, by launch country. 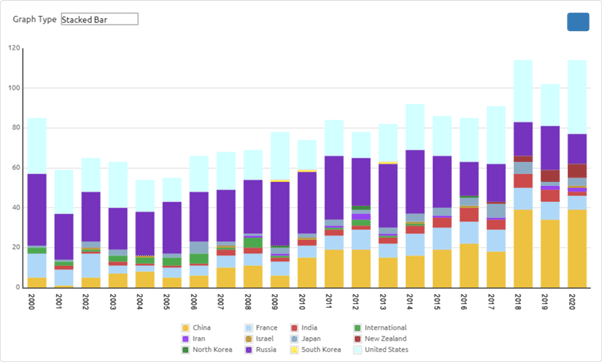