As space becomes increasingly commercialized and militarized, the spacecraft population is growing fast. Sadly, the debris object population is also growing fast. As a result, the attention of the governments of space faring nations have become increasingly focussed on Space Situational Awareness (SSA) (the US Space Force now prefer to refer to Space Domain Awareness (SDA)) as they grapple with the congestion challenge.

From a civil governmental point of view the Space Domain Awareness concerns are: –

Note, the above only covers the conjunction risk,  there are other nonphysical concerns with Space Domain Awareness, including frequency interference, space weather and astronomy optical interference.

Military users share the above concerns as part of their job is to ensure that space remains a safe environment (protect mission), but in addition, military organizations need to defend, which means that an understanding of threats and tactical opportunities e.g. observation or communications capacity is required.

Seradata produces the SpaceTrak database (not to be confused with US Space Command’s space-track.org) which covers all orbital launch attempts since the first orbital launch: Sputnik in 1957. For over forty years, Seradata (and its predecessors) have been collating data on orbital rocket launches and spacecraft histories. We believe we have a complete data set of orbital launches and of suborbital launches related to orbital systems (plus Space industry related suborbital) along with the spacecraft carried. Seradata also research all the planned future launch satellites and launch schedule.

In order to protect and defend the space environment, governments form space operations cells to track objects and mitigate conjunction risk. So how does Seradata SpaceTrak assist this mission? SpaceTrak is linked to the internationally used NORAD catalogue. Enabling users to:-

For those wishing to extract data for a bespoke detailed analysis, the SpaceTrak Query Tool enables complex filters and comparisons to be built, viewed, and exported to an Excel spreadsheet in seconds.

The US government has recognised that many commercial players are entering the Space Domain Awareness market using novel technical sensor and software approaches, for example, using earth-based radar and telescopes. This provides an information opportunity but also introduces validation and data overload challenges.

The SACT exercises generally run for a week and are set up to realistically simulate potential problematic space scenarios including: Search and Recovery (SAR), Closely Spaced Object (CSO) discrimination, satellite characterization, high-cadence surveillance, conjunction assessment, Rendezvous and Proximity Operations (RPO) analyses. Operational cells are set up in Australia, Europe and the USA in order to follow the sun in three shifts. In sequence, each identify and track objects of interest providing un-interrupted STM for twenty-four hours.

Part of all three teams is a Public Satellite Research and Analysis (PSRA) analysis resource which is where Seradata come in, providing the SpaceTrak database to the teams. The SACT leverages the Seradata service to augment operations and also help design missions. Information is made available to the SACT participants in two ways, via a the SpaceTrak intuitive user-friendly browser-based tool and via machine-to-machine streaming through the UDL. Seradata has also provided analysts to the European (France) cell and frequently participates in the AFRL Dragon Army Operations rehearsals. Through the AFRL Dragon Army program, the SpaceTrak system has been directly integrated into several partner companies’ products. Ready access to public source information helps the SACT operators understand context to satellites in the mission. 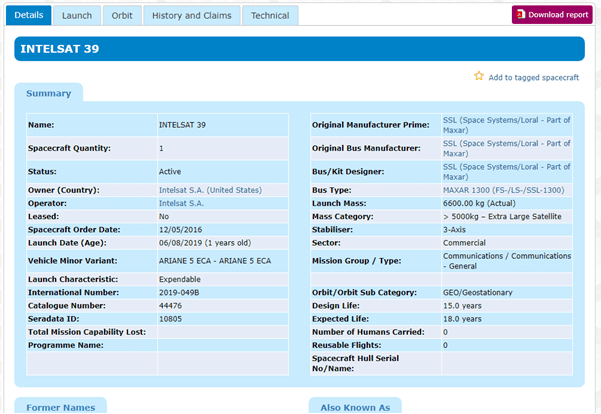 For more information about Seradata’s SpaceTrak database and how to subscribe, go to seradata.com/spacetrak. If you wish to arrange an online demonstration, please contact us by email: info@seradata.com.