The Satellite Market Analyst may be employed at a wide variety of organisations including: government (civil and military), satellite (including subsystems) or launcher manufacturing, satellite operators, consultants and finance, but while the emphasis and focus will vary, the data requirement is surprisingly common.

The key data requirement is a rich, complete and well organised satellite database such as Seradata’s online SpaceTrak service. The data should also include future (backlog) spacecraft. Key satellite market analysis fields are:-

With this data set and appropriate tools, the analyst can build a market picture from the bottom up, including satellite pricing.

A common requirement is historic spacecraft launched numbers by year, grouped by a metric of interest, e.g. orbit, mass or owner country. Seradata’s SpaceTrak service can support this in two ways via the SpaceTrak Query Tool or via the higher level Launch and Satellite Market Analysis tool with the capability to count launches or spacecraft and the concept of time range and period built in. The latter is very easy to use but is less granular and less flexible than the Query Tool. Here is an example output from the SpaceTrak Launch Market Analysis tool. 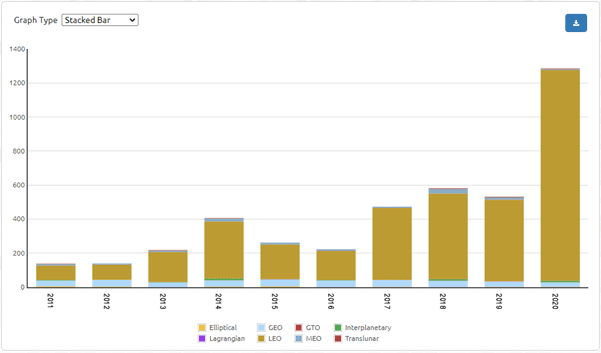 Analysis of the GEO belt. In this example we have used the Seradata SpaceTrak Query Tool to search for Active GEO satellites between and zero and twenty degrees east with a C band communications payload. The results of this query are shown in the interactive table screen shot below.

From here the analyst may drill down to the satellite general and payload capability detail, including number of transponders, and gateway/user frequency ranges (ITU brought into use (BIU)).

With the increasing concern about the space environment many organisations need to know, what’s in orbit, who owns it and what’s its status? A simple query using SpaceTrak’s query tool reveals the answer in seconds. However, be careful, while Seradata SpaceTrak logs satellite break ups, it still shows the satellites as one entity even if, in reality, it is now many fragments.

Perhaps the most important requirement of the Space Analyst is to look forward in time. What’s in the pipeline and what are the trends? Seradata add spacecraft to the SpaceTrak database if the are likely to be financed. So the database can display all the credible announced spacecraft with thie future intended launch date.