While the US Congress or the Russians themselves may not like it, a Russian RD-180 engine was used to successfully launch a US military communications satellite at 0415 GMT on 17 October. The 6,168 kg Advanced Extremely High Frequency satellite No. 4, (AEHF 4) satellite was launched from Cape Canaveral, Florida by a United Launch Alliance (ULA) operated Atlas V 551 rocket which uses the RD-180 as its main first stage engine. 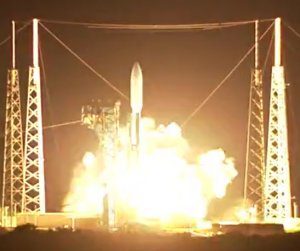 Built by Lockheed Martin Space Systems with Northrop Grumman supplying the communications payload, the AEHF 4 satellite will operate in the Geostationary Earth Orbit (GEO). It was originally planned but was later cancelled after the US Air Force began its TSAT programme. However, when that was also cancelled, the AEHF 4 construction was reinstated. The spacecraft was to have been launched in October 2017, but had to be delayed after it was discovered that there was a fault in the satellite’s power regulation unit.