At 0844 GMT, on 21 May, an Orbital ATK Antares rocket lifted-off from the Mid-Atlantic Regional Spaceport, Virginia, carrying the CYGNUS OA-9 cargo craft to the ISS (International Space Station). This Cygnus craft received the name SS J.R. THOMPSON, after a former Chief Operating Officer at Orbital ATK predecessor company Orbital Sciences Corporation. Alongside the primary Cygnus mission, the launch also carried 15 CubeSats to the ISS, seven of which form the NASA ELaNa XXIII mission. 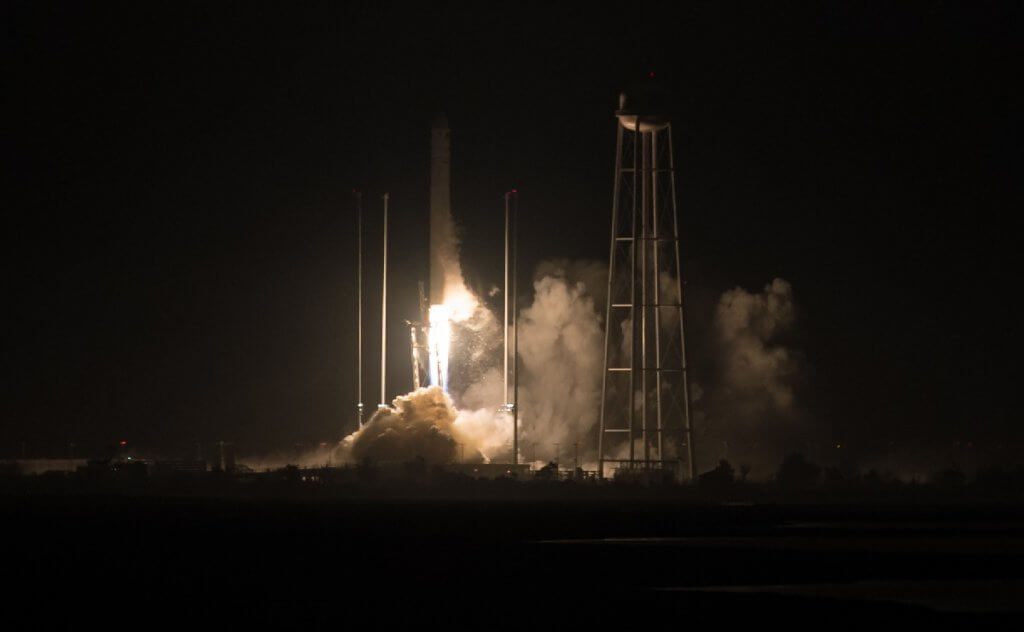 The Cygnus craft, plus its payload, has a lift-off mass 6,173 kg of which 3,350 kg is cargo and another 800 kg is propellant. The 15 co-payloads joining the Cygnus craft are all of various CubeSat form factors.

9 of the 15 CubeSats are being transported as pressurised cargo in the CYGNUS craft to be unloaded onto the ISS before being deployed from the NanoRacks deployer on the Japnese Kibo module. Seven of these form the NASA ELaNa XXIII grouping: CUBERRT a 6U-CubeSat evaluating advanced Earth remote-sensing equipment; EQUISAT a 1U-CubeSat carrying an LED beacon payload; HALOSAT a 6U-CubeSat carrying an astronomical payload to study the Hot Galactic Halo; MEMSAT a 1U-CubeSat testing “memristor” technology; RADSAT-G a 3U-CubeSat testing a new radiation-tolerant computer system; RAINCUBE a 6U-CubeSat a NASA JPL mission to evaluate a miniaturized Ka-band atmospheric radar; and TEMPEST-D a 6U-CubeSat designed as a precursor to the planned TEMPEST six-satellite mission. Additionally, the first Bulgarian CubeSat, ENDUROSAT ONE, a 1U-CubeSat carrying an amateur radio payload and RADIX, a 6U-CubeSat to test a LEO data-relay system utilising an optical downlink are joining the ELaNa satellites in the CYGNUS hold.

The remaining six CubeSats are four LEMUR 2 units from regular Cygnus passenger Spire Inc, as additions to it’s weather recording and maritime tracking fleet, and two CubeSats from the Aerospace Corporation – AEROCUBE 12A/B – to evaluate several nanotechnology payloads as well as a new star-tracker. These six satellites are installed into the NanoRacks External Deployment unit and will be deployed directly from the freighter once it has completed its mission at the ISS and is heading back to Earth.

Following a standard three-day transit to the ISS, the Cygnus freighter reached 10 metres away before being grappled by the Canadarm 2 robotic-arm – under operation by NASA astronaut Scott Tingle – at 0926 GMT. It was then manoeuvred to the Earth-facing docking port on the Unity module before finally being docked at 1213 GMT.

The freighter will remain docked to the ISS for nearly two months before undocking and completing the final phase of its mission. This entails deploying six CubeSats that are installed within the external deployer on the freighter itself, and destroying the station’s waste products it will be carrying at atmospheric re-entry.

This Cygnus mission is the first instance of the standard C2V2 (Common Communications for Visiting Vehicles) being used on an Orbital ATK Cygnus craft. This replaces the previously used JEM PROX communications system. The C2V2 was mandated to be used on all CRS2 – and future missions – by NASA in an effort to standardise the potentially several coms systems that would be utilised by the many companies operating craft docking with the station.