The Ariane 5-ECA roared off its launch pad in Kourou, French Guiana at 2037 GMT on 4 December 2018.  The launch carried two satellites: GSAT 11 and GEO-KOMPSAT 2A. 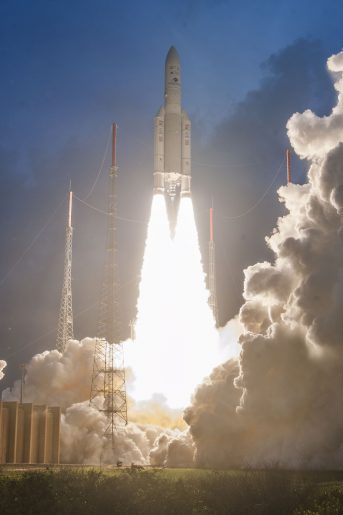 Installed as the Ariane 5 ECA’s upper passenger, GSAT-11 is an operational telecommunication satellite designed and manufactured by ISRO. To be positioned at 74 degrees East, GSAT-11  ̶  ISRO’s largest and heaviest communication satellite ever  ̶  is configured on its next-generation I-6K bus/platform.  It will operate a communications payload in Ku- and Ka-bands using a multi-spot beam coverage over the subcontinent and nearby islands. The satellite has a minimum design life of 15 years.

India has a longstanding relationship with the French-led European Ariane rocket system – even licence producing some of its earlier rocket engines. Since the launch of India’s APPLE experimental satellite on Ariane Flight L03 in 1981, with this latest launch Arianespace has now orbited 22 satellites for ISRO.

Covering the Asia-Pacific region, GEO-KOMPSAT-2A the satellite which was developed by KARI, at its facility in Daejeon, will be stationed at the 128.2° East orbital location for a 10-year nominal life in service.