“Arianespace is delighted to announce that Horizons 3e and Azerspace 2/Intelsat 38 have been separated as planned in their targeted geostationary transfer orbit. For Ariane 5 mission No. 100, our heavyweight launcher has once more performed flawlessly. Congratulations to all,” said Stephane Israel, CEO of Arianespace.  This news release marked the success of the 100th flight of the Ariane 5 series. The Ariane 5 ECA launched from the Kourou launch site in French Guiana at 2238 GMT on 25 September 2018. 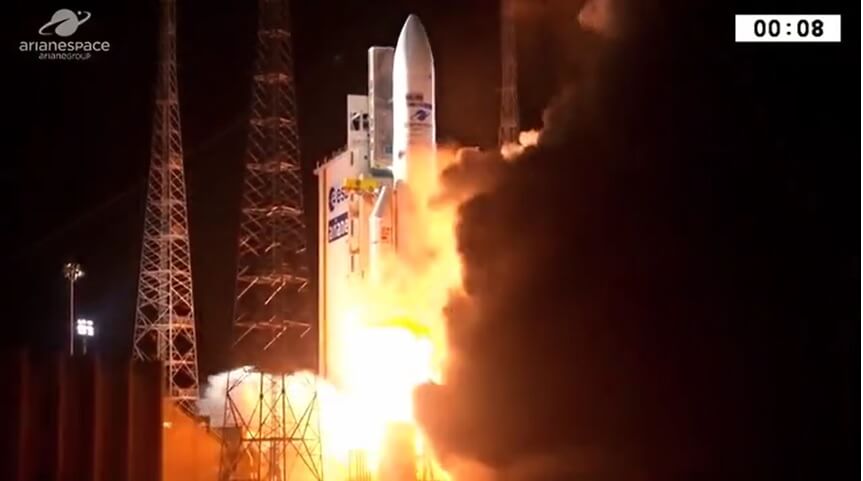 The ESC-A upper stage shut down at 2303 GMT after a Geosynchronous Transfer Orbit was achieved. The first satellite to be separated at 2306 GMT was the heavier of the pair, the 6,441 kg Horizons 3e spacecraft. which was built by Boeing. Horizons Satellite Holdings which owns the satellite is a joint venture between Intelsat and SKY Perfect JSAT of Tokyo. The Horizons 3e satellite will provide high-bandwidth Internet and other services over the Asia-Pacific.

This was followed by the Sylda payload adapter being ejected at circa 2313 GMT, and then the smaller  3,500 kg Azerspace 2/Intelsat 38 satellite was separated at 2320 GMT.

Azerspace 2/Intelsat 38 was built by SSL (the former Space Systems/Loral company) based in Palo Alto, California. The spacecraft is a joint program between Azercosmos — Azerbaijan’s national satellite operator — and Intelsat. It will provide direct-to-home broadcast services over parts of Europe, the Middle East and South Asia, and support government services over tropical Africa.

Comment by David Todd: Ariane 5 has been an excellent workhorse, and has proven very reliable. That is not to say that it will ever hit its “design” reliability target of 98.5 per cent. According to the Seradata SpaceTrak database, the Ariane 5 family has achieved 95 per cent on a “raw failure” basis (five failures out of 100 flights), and circa 97 per cent when the failures are corrected for actual severity/capability loss.