After over a month’s delay due to industrial action and political protests in French Guiana, it is fair to say that Arianespace was “chomping at the bit” as it impatiently waited to get its Ariane 5 launch programme back under way. However, there was an annoying short delay on 4 May due to an issue with fuel loading and telemetry. Nevertheless, at 2150 GMT an Ariane 5 ECA successfully leapt from its Kourou launch pad. It took the Brazilian military comsat SGDC-1 and the commercial communications satellite Koreasat 7 into geosynchronous transfer orbit (GTO).

The 5,735 kg SGDC-1 (Satellite Geostacionario de Defesa e Comunicacoes Estrategicas 1) carries a Ka-band payload for the national broadband programme and X-band for military communications. The spacecraft was built by the European company, Thales Alenia Space.. Later SGDC satellites will be made in Brazil.

The 3,680 kg Koreasat 7 satellite, also built by Thales Alenia Space, will provide communications to Korea, the Philippines, Indonesia and India using a Ka- and Ku-band payload. 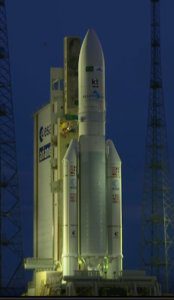 The Ariane 5 ECA waits patiently on its launch pad on 4 May 2017. Courtesy: Arianespace 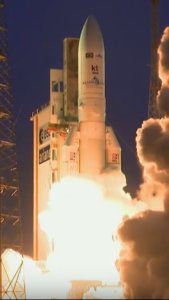