Arianespace announced on 14 September that it had received the first two confirmed launch orders/confirmations for its new Ariane 6 launch vehicle (the SES O3b constellation currently holds options). The rockets, which will fly in a -62 configuration using two solid rocket boosters, will carry four GALILEO satellites apiece. The order was made by the European Space Agency (ESA) on behalf of itself and the EU. The construction of the eight new satellites had already been ordered from a joint OHB/SSTL team – the same consortium that built the previous GALILEO spacecraft – earlier this year. The flights will take place in late 2020 and in 2021 respectively. The launches will be backed up by Soyuz rockets should the timeline not be reached.

The news added to the earlier SES announcement on 12 September that it had given an order to Arianespace for the launch of its high-throughput communications satellite SES-17. The launch will be performed by an Ariane 5 ECA from the Kourou launch site in French Guiana in 2021. 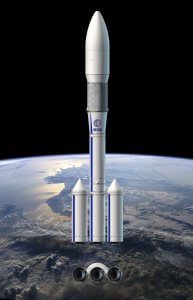 In addition, SES has selected a Soyuz launch operated by Arianespace for the fifth launch of four of its medium Earth orbit communications satellites in its O3b constellation. This actually represents a confirmation of a previous booking for a Soyuz ST-B (Fregat MT) launch. With three launches on the Soyuz ST-B (Fregat MT) carrying four O3b satellites having already taken place, and with the fourth launch due in 2018, the fifth launch is due in 2019.