While some travel expenses claims are hard to get paid – as the Apollo 11 crew found out with their joke mileage claim for their trip to the moon – that does not mean that real expenses fiddling does not happen – even in an august institution like NASA.

NASA has confirmed that an astronaut resigned from the administration after apparently making a fraudulent claim for US$1,600 taxi expenses. The identity of the astronaut was not released, but Keith Cowing of NASAWatch.com has revealed that the astronaut concerned was Cady Coleman who left NASA in December 2016. During her 24 year NASA career, the former US Air Force Colonel with a doctorate in polymer science, flew three times into space, twice on the Space Shuttle (STS-73 in 1995 and STS-93 in 1999) and once on a Soyuz in December 2010. She spent six months on the International Space Station. 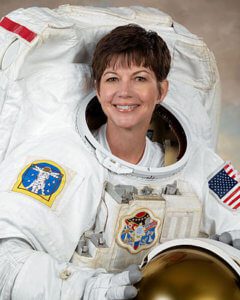 Comment by David Todd: We all make mistakes and do stupid things, but it is always a surprise to find out that our heroes also have feet of clay. This expenses fiddle event is not the first time that NASA astronauts have been scandalised. The astronaut “Love Triangle” jealousy case involving astronauts Bill Oefelein, Lisa Nowak and air force officer Colleen Shipman comes to mind. That resulted in a conviction for Nowak for a minor assault on Shipman.