NASA astronauts Josh Cassada and Frank Rubio competed their mission to install the fourth of six roll-out solar array panels during US EVA-83. The ISS Quest airlock was depressurised at 1311 GMT and the hatch was opened at 1319 GMT to begin the spacewalk on 22 December.

The iROSAs will increase station power generation capability by up to 30 per cent increasing the total available power up to 215 kilowatts from 160 kilowatts once all six Roll-Out Solar Arrays have been installed. 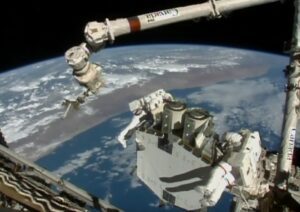 The astronauts first set-up cables in readiness for the installation of the IROSA solar array on the 4A power channel on the port (P4) truss. They then released the two support beams holding the iROSA solar array in its temporary position before finally completing the major objective of installing the solar array into its final position.

The successful EVA concluded at 2027 GMT after 7 hours and 8 minutes.

This was both Cassada and Rubio’s third spacewalk and the 257th EVA in support of the space station assembly, upgrade and maintenance.