It has been announced by her manufacturer Mattel that the girls doll Barbie, who has been dressing in space inspired clothes since the 1960s, is in space with her friend on the International Space Station (ISS). Her mission is as part of Mattel’s collaboration with the ISS U.S. National Laboratory Mission DreamStar, an outreach programme designed to encourage girls into STEM (science, technology, engineering and mathematics) subjects at school.  Barbie has already had a tour of the ISS and a good look out of the portholes and cupola windows aboard. She returns in the summer where she will take up residence at the  Smithsonian’s National Air and Space Museum’s Steven F. Udvar-Hazy Center in Chantilly, Virginia.

P.S. Don’t get Barbie confused with Jane Fonda in the sci-fi movie sex-comedy Barbarella (1967) or there could be some red faces. 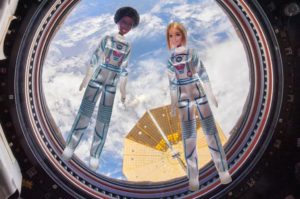