At 0145 GMT on 20 October 2018, an Ariane 5 ECA rocket successfully launched the Bepi-Columbo unmanned joint mission to Mercury. There are two main spacecraft plus a carrier spacecraft on the mission.

The Mercury Transfer Module (MTM) can be regarded as the main transfer and delivery spacecraft. It is carrying three cameras to monitor the deployment of antennas and the other spacecraft. Attached to the MTM are the JAXA Mercury Magnetospheric Orbiter (MMO) and the ESA Mercury Planetary Orbiter (MPO). To protect the spacecraft from the harsh solar environment, a Magnetospheric Orbiter Sunshield and interface Structure (MOSIF) have been fitted.

Using electric propulsion and gravity assists, the MTM’s flight to the planet involves two Venus flybys followed by a succession of six flybys of the planet Mercury itself before its final orbital insertion in December 2025.

ESA’s MPO will go into an orbit around Mercury of approximately 1500 x 400 km above its surface, from where it will use a high-resolution imaging camera to map the planet. Meanwhile JAXA’s MMO will use a highly elliptical orbit to map Mercury’s magnetic field. 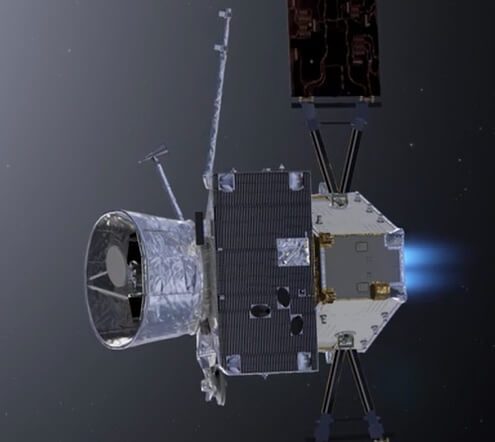 Bepi-Columbo mission’s three spacecraft joined: MTM firing its engines, MPO ahead of that, and MMO inside the collar of the sunshield. Courtesy: ESA

Thinking about molten Mercury on the edge of Lake Constance