On 29 April 2018 at 1707 GMT the New Shepard reusable launch system flew on Mission 8 (M8) of the New Shepard programme from the Van Horn launch site in Texax.  This was a reflight of the Mk II capsule and launch vehicle flown on the endo-atmospheric suborbital Mission 7. The Crew Capsule Mark II reached an apogee of 351,000 feet (107 km) this time qualifying it as a spaceflight.  The launch stage/booster was subsequently landed using a powered technique, while the crew capsule was landed using parachutes. 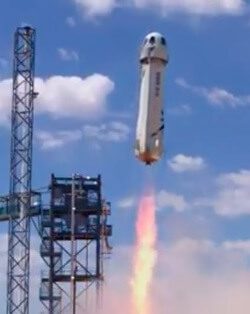 This flight was the second for Blue Origin’s test dummy “Mannequin Skywalker” who flew to space conducting astronaut telemetry and science studies. The flight also carried research payloads for NASA, the German Aerospace Center (DLR), and commercial customers. Blue Origin hopes to begin human test flights by the end of this year.