China has launched a new lunar satellite called Queqiao. This is no scientific probe or lunar rover, however. Instead it is a lunar communications relay satellite that will be used to relay data from future lunar exploration missions, including those to the far side of the moon as communication “through the Moon” is impossible. The first mission ever to land on the lunar far side will be the Chinese Chang’e 4 lander and rover, due to be launched later this year.

Lift-off of the Long March 4C from the Xichang satellite launch centre in Sichuan Province took place at 2100 GMT on 20 May 2018. The satellite was sent on a translunar trajectory, which, after some more manoeuvres, will result in the relay satellite being set into a halo orbit around the Earth-Moon Lagrangian gravitational balance position L2, about 64,000km beyond the Moon. 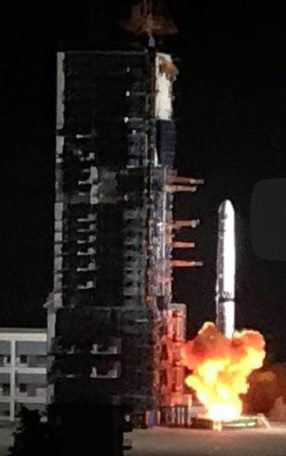 The 435kg Queqiao will also carry an astronomy experiment called the Netherlands-China Low-Frequency Explorer that will try to detect radio signals from the begining of Universe. The craft will also monitor solar wind in the lunar vicinity. The name Queqiao means bridge of magpies.

Aboard the launch were two 45kg Longjiang (meaning dragon river), aka Discovering the Sky, Longest Wavelengths Pathfinder (DSWPL) satellites built by Harbin Institute of Technology. They are identical except that the second spacecraft carries an additional miniature optical camera built by King Abdullah Aziz Technology City (KACST). While Longjiang 1 was successfully deployed into a translunar orbit, its transmissions ceased on 21 May.  Nevertheless the dead satellite went onto to pass the Moon on 25 May having failed to make lunar insertion burn.  Longjiang 2 was more fortunate and entered lunar orbit on 25 May.