While China has come under international criticism for some of its policies, it still retains international admiration for its space exploits. The latest was the launch of its Chang’e 5 lunar sample return mission.

The upper stage of the Long March 5 then made a Trans Lunar Injection (TLI) burn to send the spacecraft on its way to the Moon. The Chang’e 5 mission consists of two main spacecraft parts – a sample return capsule along with a service module/transfer stage, and the lander itself with an ascent module attached.

The mission’s architecture is strongly reminiscent of the lunar orbit rendezvous and docking plan used for NASA’s Apollo human landing during the 1960s/1970s, which adds to speculation that the mission is, in fact, a scaled-down forerunner for a Chinese human lunar landing mission. Once near the Moon the conjoined spacecraft will enter lunar orbit and then descend into a low Lunar orbit before the descent/ascent module combination detaches. 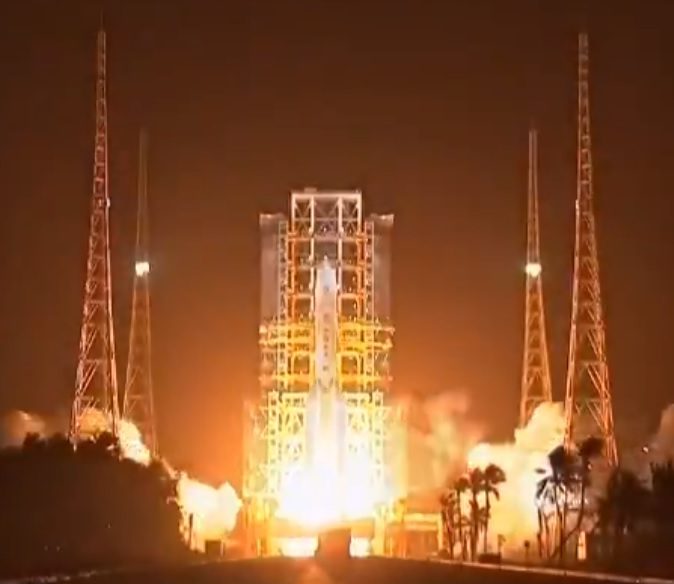 The landing is set to take place near Mons Rümker in the Oceanus Procellarum on the Earth side of the Moon. Samples will be recovered using a drill and a claw digger and placed in the ascent module, which  will launch and redock with the orbiting sample return capsule and transfer the samples. The sample return capsule and transfer stage will then make a burn for the return to Earth, with re-entry and landing in Siziwang Banner, Inner Mongolia, scheduled for mid-December.

Update on 30 November 2020: Chang’e 5, after making two trajectory corrections on the way, made a burn at 1239 GMT on 29 November to slow itself down to enter a low elliptical lunar orbit.  The lander/ascent vehicle separated from the orbiter/return capsule at 2040 GMT on the same day.