A Long March 5B (CZ-5B) rocket lifted off from its launch pad at 0737 GMT on 31 October 2022.  The launch took place from Wenchang Spacecraft Launch Site on the island of Hainan.  Aboard was a key piece of the Chinese Space Station (CSS), the Mengtian experiment module. This is the counterpart of the previously launched Wentian module. Once docked, the module will form one of the cross pieces making the Chinese Space Station “T” shaped with the core module Tianhe being the central singular upright.  The module is 17.9 m long and has a diameter of 4.2 m. Its mass is circa 20 metric tons.

The module is divided into three: a control module to which solar arrays are attached, a pressurised module for the Chinese Taikonauts, and an unpressurised module which has an airlock for placing objects into space.  The module is also equipped with a robot arm. The module’s main use will be for scientific experimentation. Mengtian means “Dreaming of the Heavens” in Mandarin Chinese.

Update on 1 November 2022: The Mengtian laboratory module successfully docked with Tiangong Space Station (CSS) at 2027 GMT on 31 October 2022.  While some construction steps remain, this docking represents the last major module addition to the CSS.

Update on 3 November 2022: The Mengtian laboratory module has successfully finished transposition from axial to radial port of Chinese Space Station (CSS) via a robot arm. The station is now in its full T configuration.

Update on 4 November 2022: The uncommanded re-entry of the Long March 5B upper stage took place at 1001 GMT on 4 November over the Pacific.

Update on 9 November 2022:  On 9 November at 0655 GMT Tianzhou-4 undocked from the now-completed Tiangong space station ahead of its deorbiting. 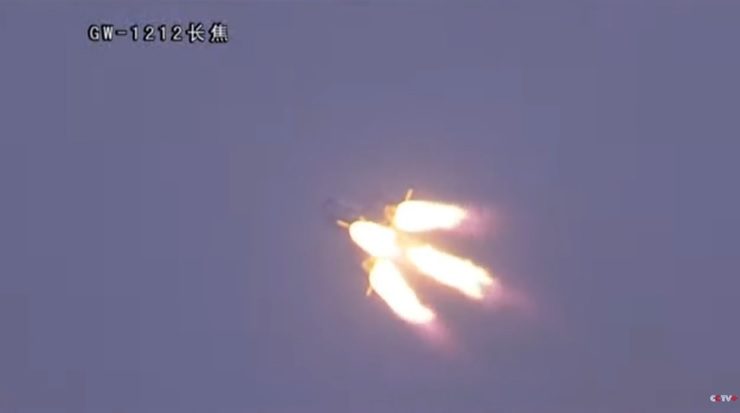 The four firing boosters make Long March 5B launch a distinctive sight as it carries the Mengtian module for the Chinese Space Station into orbit. Courtesy: CCTVhttps://twitter.com/i/status/1588056763567378432