In what is seen as a response to the US Air Force (now the US Space Force) X-37B/OTV reusable space plane, China has launched its own Chinese version dubbed the CSSHQ  – Chonfu Shiyong Shiyan Hangtian Qi (= Reusable Test Spacecraft) using a Long March 2F (CZ-2F) rocket from the Jiuquan launch site. The launch was at approximately 0730 GMT on 4 September 2020. The launch of the Long March 2F/T2, which used a larger fairing than usual, was deliberately kept secret until the day before the launch when a NOTAM aircraft advisory was sent. Another clue as to the imminence of the planned launch was that China’s Yuanwang space tracking ships and been pre-positioned around the world.

The spacecraft was reportedly injected into a 347 x 331 km at 50.2 degrees inclination orbit low Earth orbit and it was reported by China’s Xinhua news service as being successful. The agency notes that the space plane will eventually return to a landing site in China and will be used for research into reusable vehicles – not mentioning its likely military reconnaissance role (China has never admitted to anything with a military use in space).

Update on 6 September 2020: The Chinese news agency Xinhua has announced that the CXXHQ spaceplane has landed albeit with no official landing site or time. Western sources indicate that the landing was on runway 05 at Lop Nor at 0200 GMT on 6 September two days in orbit. The spacecraft reportedly jettisoned of one object – a likely service module – prior to deorbit/re-entry. 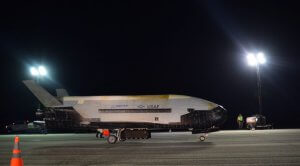 The US X-37B lands at KSC. China has apparently copied it. Courtesy: US Air Force

All times from Jonathan McDowell