Dmitry Rogozin, the controversial head of Russian space agency Roscosmos, has been removed from office by Russia’s President Vladimir Putin. Deputy Prime Minister Yury Borisov has replaced him. It is not known if Rogozin was fired or whether Putin has other plans for his friend and supporter. There were rumours Rogozin would be sent to the disputed Ukrainian Donbass region to become its governor.

Rogozin’s period as head of Roscosmos, the Russian space agency and conglomerate of space companies, has been mixed. He never really got to grips with the endemic bureaucracy and corruption that characterised – and hindered – the underperforming Russian space industry. Likewise, budgetary limitations forced him to choose certain projects over others – and picking winners was not his forte. For example, he eschewed carrying on with an ingenious plan to make the Proton rocket competitive again by cutting a stage, in favour of the Angara rocket programme – a rocket that will never be competitive worldwide.

Nevertheless, his relationship with the former Administrator of NASA, Jim Bridenstine, was famously good and for a time international cooperation under Rogozin seem well-starred. However, since Bridenstine’s departure, Roscosmos’s relationship with NASA has cooled – especially since Russia’s invasion of Ukraine. Rogozin himself caused Russia’s space industry to suffer simply because of his strong connection with the Putin regime. Any companies associated with him (including parts of Roscosmos) were sanctioned after Russia’s original annexation of Crimea.

The nationalistic Rogozin was especially tactless in his use of Russian space hardware, and even its cosmonauts, to promote the Russian view of the invasion. This ranged from having “Donbass” written on the side of a Soyuz rocket launching to the International Space Station (ISS) to having one of the disputed region’s flags being flown by cosmonauts on the ISS. Rogozin made the relationship worse by first threatening to end support for NASA astronauts on the station, and then – perhaps worst of all – openly calling for a genocide of Ukrainians.

It was not just NASA that Rogozin upset. He ordered the effective capture of the German e-Rosita instrument on the Russian Spekr-RG astronomy satellite, and the impounding of 36 Anglo-Indian OneWeb communications satellites, which were due to be launched by a Soyuz rocket.

Update on 26 July 2022: In a meeting with President Putin, the new head of Roscosmos, Yury Borisov, committed Russia to ending its involvement with the ISS after 2024 (now taken to mean in the period 2025 – 2028) in favour of building Russia’s own space station. “Good” was Putin’s reply. Officially, the planned retirement date is 2025 but NASA and its other space station partners wanted to delay it to 2030. 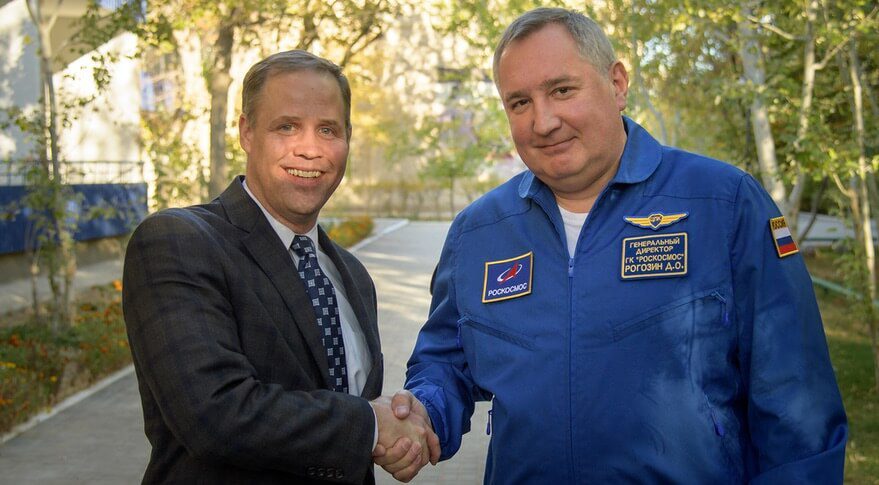