The US commercial unmanned space freighter Cygnus NG-15 (Katherine Johnson) was launched successfully by an Antares 230+ rocket at 1736 GMT on 20 February from the Mid-Atlantic Regional Spaceport at Wallops Island, Virginia.  The 8,050 kg craft was launched on a resupply mission to the International Space Station (ISS) on behalf of NASA and included in its mass 3,734 kg of payload carried in its pressurised section.

Also aboard the launch were nine Thinsats – small payloads on strings which were deployed from the rocket shortly after launch.

Within the Cygnus NG-15 cargo was a JAXA JSSOD dispenser taken to the ISS as part of the cargo to be taken in by the ISS.  On this dispenser were mounted GuaraniSat, Maya-2, TAU-SAT, TUMnanosat plus its secondary satellite and these will be launched via the dispenser from the Japanese Kibo module.

While ISS cargo delivery (including the JSSOD plus cubesats) was its main role, the Cygnus NG-15 spacecraft also had a satellite delivery role of its own. It is to dispense some satellites itself after its delivery mission via the Nanoracks NRCSD-E dispenser carrying some cubesats including Dhabisat, and via the SEOPS-LLC Slingshot dispenser, carrying Gunsmoke-J and two undisclosed military cubesats.

The  Cygnus NG-15 spacecraft has the alternative name of Katherine Johnson in honour of the late NASA mathematician and trajectory analyst who successfully worked on the Mercury and Apollo missions despite being in the era of racial segregation.

Update: The Cygnus was captured at 0938 GMT by the ISS robot arm Canadarm-2. It was later berthed onto the station. 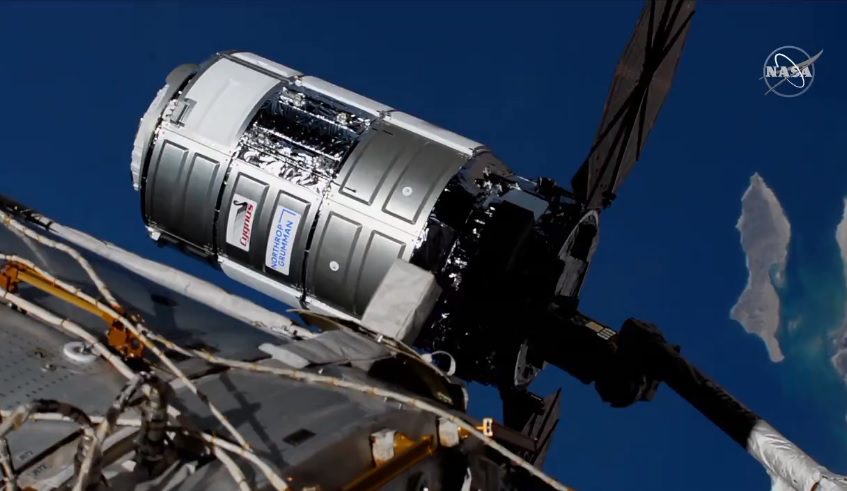 Cygnus NG-15 is captured by Canadarm-2 on the ISS. Courtesy: NASA TV

Some details were supplied by Jonathan McDowell via his space report