While COVID-19 has hobbled the launch plans of many satellite operators at other sites, Russia and China are continuing with their programmes. Thus, while Arianespace’s Soyuz launches from Sinnamary, near Kourou in French Guiana, have been suspended, its Russian counterparts continued with theirs. On 21 March, at 1706 GMT from the Baikonur Cosmodrome, near Tyuratam in Kazakhstan, a Soyuz 2-1b/Fregat M successfully launched 34 OneWeb spacecraft for the low Earth orbit communications satellite constellation.

The satellites were injected into a 450 km orbit and used on-board propulsion to raise themselves to the 1,200 km apogee operational position. So far 74 spacecraft of the 588 satellites planned for this constellation have been launched. OneWeb hopes to start regional operations once 300 satellites have been launched, hopefully by the end of this year.

Space News (Caleb Henry) reports that OneWeb may not be able to complete its constellation without new financing – difficult to achieve in the current crisis. This could have ramifications for the Ariane 6 whose first (maiden) flight was to carry OneWeb satellites, and for the EU/ESA Galileo navigation satellite system, which will fly its satellites on Ariane 6 but only after it has proved itself with a successful flight. 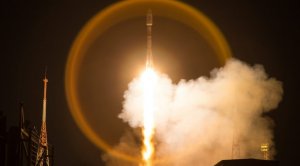