While Boeing, Lockheed Martin and the Blue Origin-led “National Team”  et al., have submitted their own bids to build the next human carrying lunar lander(s) for NASA, while its bid has been in for months,  a new entrant into the competition was formally announced this month: the Dynetics/Sierra Nevada Corporation team.

The Huntsville, Alabama-based US aerospace firm Dynetics has strong connections to building space technology.  Dynetics mainly came to public attention via its work on modifying the old Saturn V F-1 rocket engine design with a view of using it on advanced boosters for the planned powerful “Block 2” version of the SLS. The prospects of this more powerful version of SLS being built are however diminishing with the expected arrival of new cheaper-to-operate super heavy lift launch vehicle designs such as the SpaceX’s Starliner/Superbooster and Blue Origin’s New Glenn and yet-to-be formally announced New Armstrong. 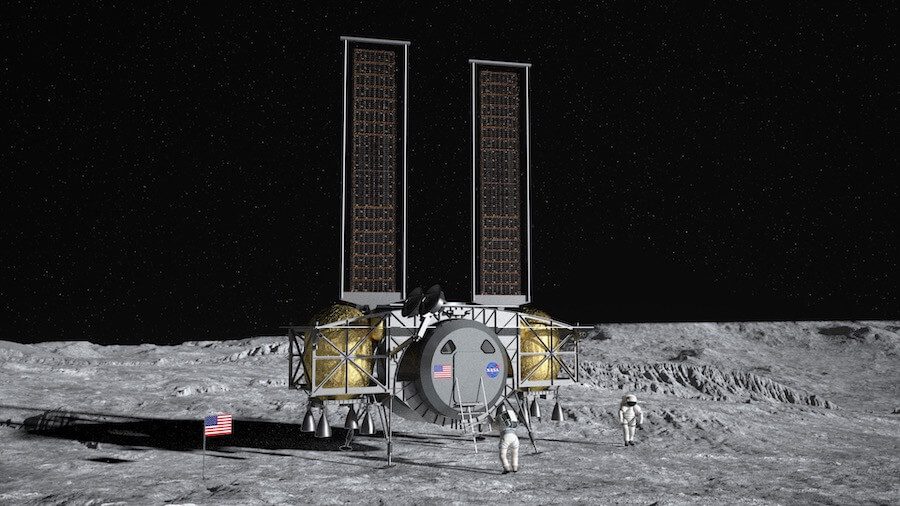 And so Dynetics has been looking for other opportunities. It has teamed up with spacecraft maker Sierra Nevada Corporation (SNC) – builder of the Dreamchaser mini-shuttle – in a bid to build a new lunar lander for NASA’s Artemis human lunar landing programme.  Details of their proposed design are sketchy, but a released artist’s illustration of their concept shows two large solar arrays to be deployed post landing in order provide power on the lunar surface.

NASA will pick two “winning” concepts from the Human Landing System competition to go forward with.