SpaceX leader Elon Musk has explained how his vision for travel to Mars encompasses uses in low Earth orbit and on the Moon – and may even act as a point-to-point superfast Earth transportation system. Speaking at the International Astronautical Congress (IAC 2017), in Adelaide, Australia, he again upstaged the plans for Mars exploration announced by Lockheed Martin – in a re-run of last year’s IAC rivalry. 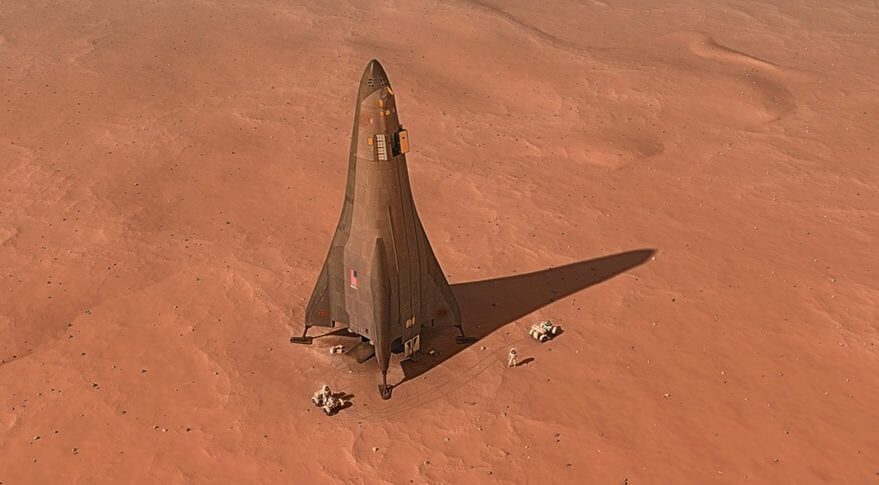 Built out of high temperature materials, the idea is that aero-braking techniques in the Martian atmosphere will bleed off the craft’s velocity before landing.  It would then use Liquid Oxygen (LOx)/Liquid Hydrogen engines in the final stages to make a surface landing.

The craft has a dry mass of 30 metric tons and 80 metric tons of propellant. After a two- or three-week stay, depending on propellant boil-off rates, the same engines could be used to launch the reusable craft back to an orbiting “Mars Base Camp” for refuelling for a second or third mission. Lockheed Martin notes that with modification, the reusable lander could also be used for lunar operations.

In similar vein, Elon Musk’s SpaceX is repositioning the 9m diameter “BFR” (short for the rather crude nickname Big F***ing Rocket) and its transport vehicle/upper stage (formerly known as the MCT – Mars Colonial Transport) as a “Jack of all Trades” space transportation system. This echoes the history of DC-3 or Boeing 747 transportation aircraft on Earth.  A new, very large reusable rocket and a smaller transportation system (with small wings for re-entry trimming and pitch angle control) will replace SpaceX’s current Falcon launch vehicles and Dragon spacecraft for carrying satellites to orbit and replenishing the International Space Station. 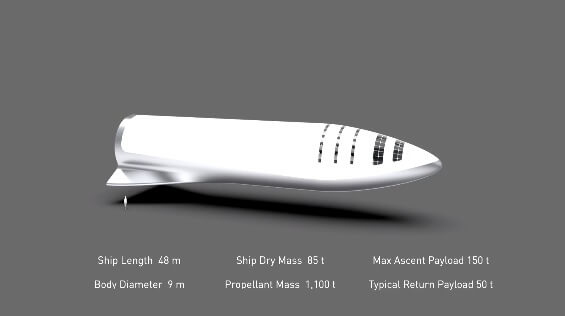 For those sceptical about whether this “one size fits all” approach would work either at a technical or economic level, Musk noted that he would have a stock of the Falcon 9s to allow for the transition. “Some of our customers are conservative, and they want to see BFR fly several times before they’re comfortable launching on it. So what we plan to do is build ahead and have a stock of Falcon and Dragon vehicles so customers can be comfortable. If they want to use the old rocket, the old spacecraft, they can do that,” he said. 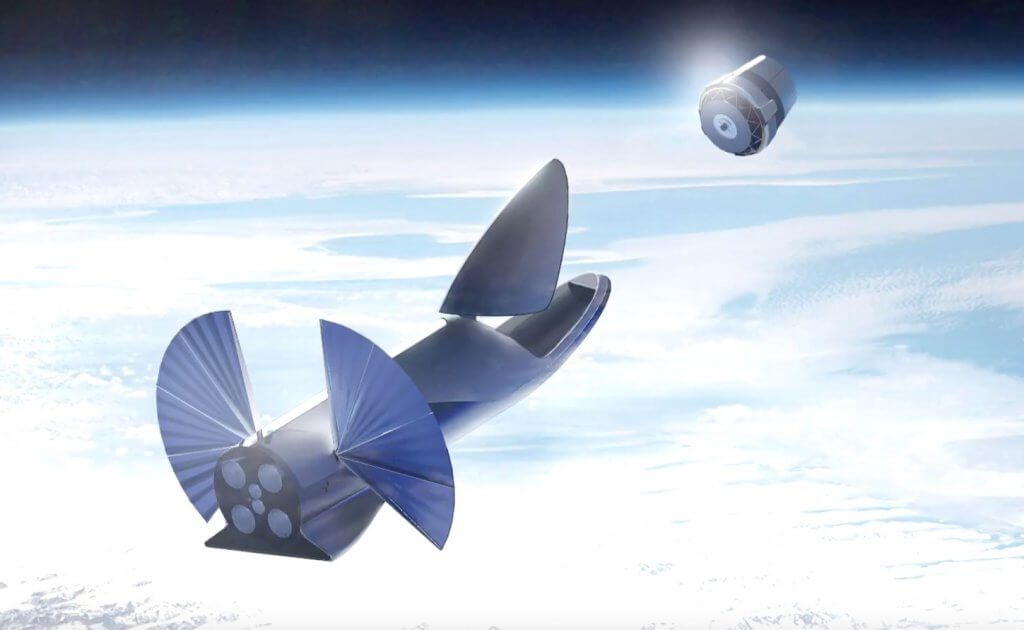 The system is powered mainly by the LOx/Methane Raptor engine design, which Musk promised would have the highest thrust-to-weight capability of any rocket engine. He noted that the upper-stage transporter would have some measure of redundancy with two central engines with the capability to land with a single engine. The first stage of the BFR is now smaller, with 31 Raptor engines rather than the 42 originally planned and, at 350 feet tall (106m), about 50 feet shorter than the original 400 feet (122m) tall design.

It will be able to land on the Moon (for the construction and servicing of a base) and, with some refueling, also to mount human landings on Mars (for the eventual construction of a Martian city).  Such is the BFR’s payload capability (150 metric tons to Low Earth Orbit) and economics, that it will even make NASA’s yet-to-fly SLS heavy-lift rocket, whose Block 2 version carries approximately the same payload but a much higher cost, effectively redundant. Musk emphasised that his rocket would be the cheapest rocket ever on a per kg (specific) basis. 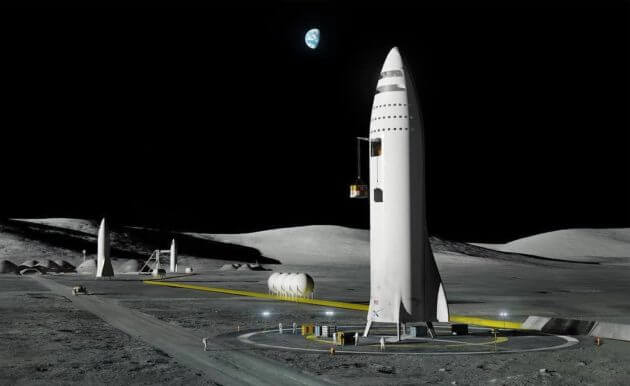 To achieve the Mars landing goal, he noted that other technologies were being developed, including automated docking and fuel transfer. Musk envisages a back-to-back docking of the vehicles to ensure this fuel transfer. He described in more detail how 100 passengers would have their own cabins inside the space liner (with two or three passengers in each). There would also be a solar storm shelter should the need arise. The aim is to launch cargo flights in 2022 with the first human mission in 2024. 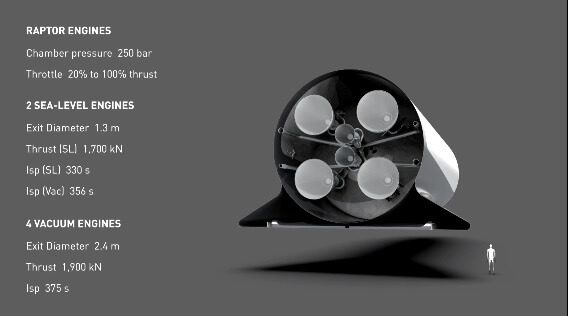 But is it any good for transportation on Earth? Probably not

While the BFR and Transport design has the potential to revolutionise space travel, much less convincing was the proposition that the system might be used as a point-to-point transportation system on Earth. The prospect of travelling between continents in half an hour sounds very impressive. But while Musk is right to “get out of the atmosphere” to avoid the continuous heating problems of high-speed aircraft such as Concorde, the real problem is economics.

While the specific cost (cost per kg of payload) of using a rocket for transportation will come down dramatically, it will still be multiple orders of magnitude higher than the per kg equivalent of a conventional First Class airline ticket. In other words, only billionaires like Elon Musk could afford to use the service. Musk subsequently rebutted this by claiming, on Instagram, that the cost would be roughly the same as a full fare economy airline flight. This is an extremely big ask given that modern jet airliners can spread their costs over thousands of flights, and that their high-bypass-ratio jet engines are an order of magnitude more efficient in terms of payload carried per kg of fuel.

The time consumed in travelling to an airport (or launching site), along with all the security checks, baggage handling and air traffic control delays, need to be sorted out first, before such high-speed transportation makes sense. Likewise, while person-to-person contact is still viewed as necessary in business and personal lives, modern telecommunications has somewhat reduced the need for very rapid transport.

There are also issues with safety. It is a dangerous proposition for persons living near the flightpath to have fuelled rockets landing vertically in or near a city. For example, modern jet aircraft have a fatal accident rate per flight of less than one in one million (sometimes less – one in ten million according to the model), while even the best of current orbital rockets achieve a failure rate of about one in one hundred (about 10,000 times worse!).

Some technical issues remain but it is still a good vision

The technical part of the presentation has made significant progress, advancing the art of building and testing very large-scale 1,000 cubic metre carbon composite cryogenic tanks. Nevertheless, there are still some questions with respect to the upper-stage transport design. Space vehicles with their centre of mass concentrated at the rear (where the engines are) are prone to difficulty in trimming/controlling pitch angle as the centre of lift moves with the decrease in velocity during planetary atmospheric entry. Musk has found that he needs some specially designed wings/trim devices to get around this and these have eaten up some of the payload performance, just as the Space Shuttle and the original HOTOL designers found.

Similarly, increasing the lift-to-drag (L/D) ratio of the vehicle in this way might cause more convective heating even if it did improve the craft’s cross-range capability. Musk accepted that there would be some ablative degradation of the thermal protection system with each atmospheric entry, which would need to be replaced from time to time with higher maintenance costs. Likewise, one wonders whether the wings on the upper-stage vehicle will cause bending moment problems on the rocket during the initial ascent after launch?

Despite Elon Musk’s charmingly nonchalant style during his presentation, even showing a slight but rather sweet stutter, he is known to be a driven and demanding man. This, along with his business and scientific intelligence, is how he gets things done. Musk’s pioneering of reusability and vertical rocket stage landings has revolutionised space travel. Whether he manages to create a single spacecraft to fulfil all the space transportation roles mentioned spacecraft remains to be seen. As the full saying goes, the BFR system may yet prove to be a “Jack of all Trades…but Master of None”.  Neverthless, the man who said he only became the SpaceX’s “Chief Engineer” because he could not find anyone else is well on the way to being counted among the rocket greats: Tsiolkovsky, Goddard, Von Braun and Korolev.