On 29 March, the recently arrived astronauts Andrew Feustel and Richard Arnold made a spacewalk (extra vehicular activity) for space station repair activities from the Quest airlock. Both have made spacewalks before on previous missions.  The airlock was depressurised at 1325 GMT and it was opened at 1330 GMT (all times from Jonathan McDowell).  The spacewalk lasted six hours and eight minutes according to hatch opening/closure.The astronauts added radio antennas to the Tranquility module and replaced a
camera set on P1 truss. The hatch was closed at 1938 GMTand the airlock was repressurised at 1943 GMT 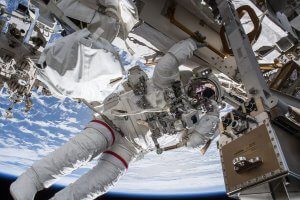 The astronaut pair had originally arrived at the ISS six days previously along with Cosmonaut Oleg Artemyev on Soyuz MS-08.