On 31 January 2017, a Falcon 9 launch successfully carried GovSat-1 (SES-16) spacecraft into orbit.  The launch took place at 2125 GMT from SpaceX’s Cape Canaveral launch pad which was recently refurbished following a prelaunch test explosion.  The GovSat-1 spacecraft was built by Orbital ATK using its Geostar-3 bus/platform.  It was built for a joint venture between SES and the government of  Luxembourg to provide X-band and K-band military communications over Europe and the Middle East.  The 4,230kg spacecraft separated as planned 33 minutes into the flight in a transfer orbit on its way to an eventual geostationary orbital position via circularisation and inclination removal burns using its IHI-built BT-4 apogee kick motor. The spacecraft is also equipped with electric thrusters.

By the time the spacecraft had separated from the second stage, the Falcon 9 first stage, which had been previously used on an on the May 2017 Falcon 9 launch of the NRO L-76 payload, had splashed down into the sea.  As it did so, it was still equipped with steering grids and deployed landing legs as if it was to be landed on a vessel (the barge normally used for landings downrange in the Atlantic was left in port). In fact, the splashdown part of a high thrust landing test using a three engine braking burn as opposed to the normally used one.  SpaceX is to try and recover the stage for examination – although it will not be used again.

Taking time out from selling flamethrowers/leaf burners as part of one of his other companies, SpaceX supremo Elon Musk published a photograph of the splashed down stage showing that it was pretty much intact. 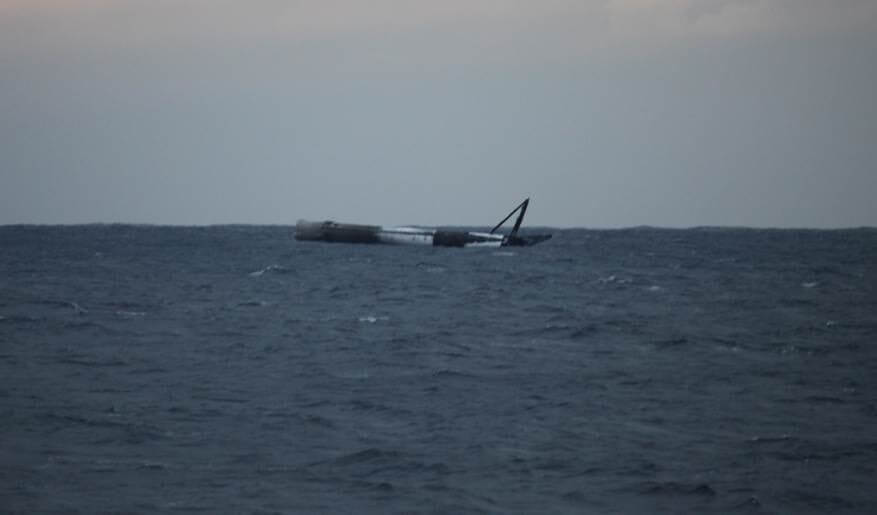 The reused first stage of the Falcon 9 flight survived its splashdown into Sea. Courtesy: Twitter/Elon Musk

The Block 3 version of the Falcon 9V1.2FT was used which uses a stage capable of reuse three times. This is being replaced by the Block 5 version which has a first stage which should be capable of ten flights.