Falcon 9 launches yet another 60 Starlink comsats into LEO

SpaceX successfully launched 60 of its Starlink communications satellites into low Earth orbit on a Falcon 9 vehicle. The launch occurred from the Cape Canaveral, Florida launch sight, at 0125 GMT on 4 June 2020. The first stage of the launch vehicle was successfully landed on the drone barge “Just Read The Instructions” 630 kilometres down range in the Atlantic Ocean approximately 10 minutes after launch. This was the fifth launch of the B1049 Falcon 9 first stage. 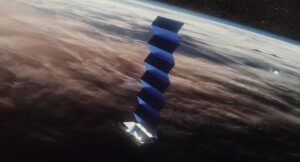