A four-metric-ton communications satellite, called Bulgariasat, 1 was successfully launched into a Geosynchronous Transfer Orbit (GTO) by a Falcon 9v1.2RR (Block 3) rocket at 0918 GMT on 23 June 2017. The launch took place from the LC39A pad at Cape Canaveral, Florida, in the USA. The first stage of the Falcon 9 launch vehicle landed successfully on the drone ship, “Of Course I Still Love You”.  The Bulgariasat 1 is to offer Ku-band communications services over Bulgaria and Serbia from its position over 1.9 degrees East.

The landing of the first stage was reported by SpaceX founder Elon Musk to harder than usual using most of the rocket stage’s “crush core capacity”. More than usual re-entry heating damage to the stage’s thermal protection system was also reported.

Before being used on the Bulgariasat-1 flight, the first stage had been used to launch ten Iridium satellites in January 2017, from Vandenberg, California. Its recovery also took place on a barge.

This was the second flight of a reusable first stage. (The previous one was on the SES-10 launch in March 2017).

While currently flying in Block 3 form, there are plans to upgrade the Falcon 9 rocket series via a Block 4 version to the final Block 5, which is designed to have a first stage cable of more flights than the current maximum of three or so. 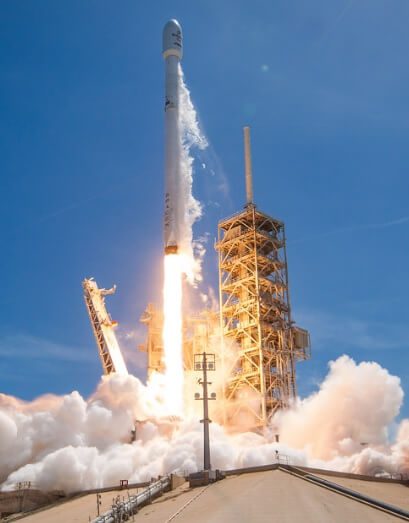 SpaceX notes that it has cut the refurbishment time between flights by several months and now plans to increase the number of reuses for each first stage. The European Space Agency (ESA), which to date has eschewed reusable launch vehicles, save for a small investment in the UK-based Reaction Engines Limited, has now decided to invest in pure reusable rocket technology. On 21 June ESA formally signed a contract worth €80 million (US$90 million) with Ariane Group (formerly known as Airbus Safran Launchers) to develop the Prometheus Liquid Oxygen(LOx)/Methane powered reusable engine. However, just copying the reusable ideas of SpaceX (and Blue Origin) is probably not the way to go. Reaction Engines’ single stage to orbit reusable design, using air breathing rockets, is the better bet if the Ariane Group wants to jump ahead of SpaceX and Blue Origin rather than just follow them. Then again, as a small investor in the firm, this writer would say that, wouldn’t he?