The Hispasat 30W-6 communications satellite was successfully launched into orbit from Cape Canaveral at 0533 GMT on 6 March. The launch used a Falcon 9V1.2 FT Block 4 rocket, which was equipped with landing legs and steering grid fins so that its first stage could land on a barge down range in the Atlantic. While initially it was intended to recover the reusable launch vehicle first stage, Core B1044, which was on its first flight, this attempt was cancelled after a deterioration in sea conditions and the recovery ships’ return to port. The Falcon 9 still flew with the full recovery hardware and conducted the regular re-entry burns and landing burns, as if it were performing a normal recovery process, before splashing down in the Atlantic Ocean.

Weighing in at over 6 metric tons at launch, and with an end-of-life (EOL) power of 11.5kW, the Space Systems/Loral (SSL)-built Hispasat 30W-6, as its name implies, is to operate from a position over 30 degrees West in Geostationary Earth Orbit (GEO). It is to provide Ka-, Ku-and C-band telecommunications services to Europe and North Africa, and part of the Americas.

The Hispasat 30W-6 satellite also carried a small subsat called PODSat for DARPA (Defence Advanced Research Projects Agency). The Novawurks-built spacecraft, which is being used for an undisclosed mission, was released soon after the 30W-6’s injection into orbit. The spacecraft was deployed using a release mechanism dubbed PODS (Payload Orbital Delivery System) designed by SSL (Space Systems/Loral), which built the 30W-6 spacecraft. The PODSat spacecraft was reportedly carried in an empty battery position. The PODSat spacecraft itself is believed to comprise four units of the Novawurks’ Hyper-Integrated Satlet (Hisat) building block system attached to a PODS chassis/bus design. 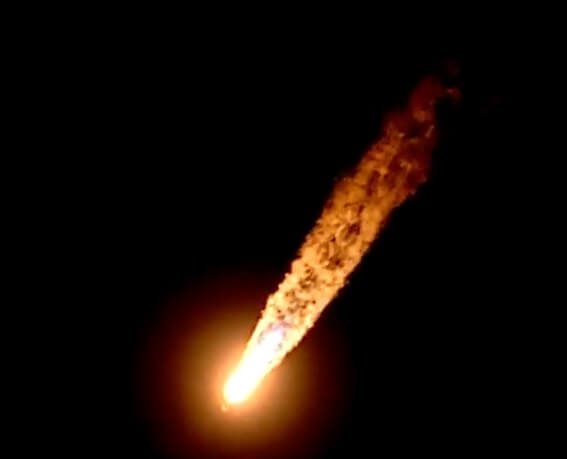 Falcon 9 launch of Hispasat 30W-6 was successfully launched albeit that the rocket’s recoverable first stage was splashed instead of landed due to rough weather. Courtesy: SpaceX