At 1417 GMT on 12 June, the Canadian three-satellite Radarsat Constellation Mission (RCM) – was launched by a Falcon 9v1.2r Block 5 into a sun-synchronous low Earth orbit of circa 604 x 584 km at an inclination of 97.4 degrees relative to the equator.  The launch was from Vandenberg in California USA.The 1,450 kg satellites are equipped with a 7 m long C-band synthetic aperture radar. 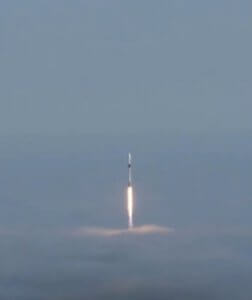 Falcon 9 leaps from the clouds as it launches three RCM satellites. Courtesy: SpaceX

After the launch the reusable first stage of the rocket was landed back on land. The second stage was later re-entered to a safe burn-up once its successful delivery of satellites had been completed.  The MAC-200 bus satellites can achieve a resolution of 3 m with a 20 m swath width but can also operate at 100 m resolution at 500 km swath.