SpaceX’s launch “cadence” (flight rate) was accelerated again with the sixth Falcon 9 launch made this year. The flight carried Inmarsat 5F-4 spacecraft, the fourth bird in the Global Express service fleet. The launch took place from the SpaceX pad at the Kennedy Space Center, near Cape Canaveral in Florida at 2320 GMT on 15 May 2017.

The Boeing-built satellite which weighed at over 6 metric tons (actual launch mass 6,086kg) needed every bit of the performance of the Falcon 9v1.2FT (Full Thrust) rocket to launch it on its way to the geostationary arc via a geosynchronous transfer orbit (GTO). As such, SpaceX decided to launch the satellite using the lighter “legless” expendable version of its first stage. In other words, there was no recovery of the stage. 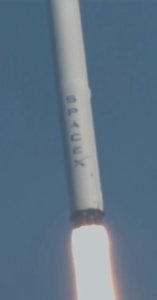 The Inmarsat 5F-4 is the fourth spacecraft in the Inmarsat “Global Express” fleet providing mobile broadband satellite communications via its Ka-band payload around the world.