July saw more than its fair share of space announcements, including official acceptance of a “vertical” spaceport in Sutherland, North Scotland, and a “horizonal” one getting the nod from Virgin Galactic/Virgin Orbit at Newquay, Cornwall, England.  But Cornwall has another space story – the famous Goonhilly satellite Earth station. It was an asset saved for the nation by the determination of Ian Jones, co-founder and CEO of Ian Goonhilly Earth Station Ltd. David Todd got to meet him at the Farnborough International Air Show, and he described how Goonhilly is now doing very nicely and has LEO communications and Deep Space plans for the future. 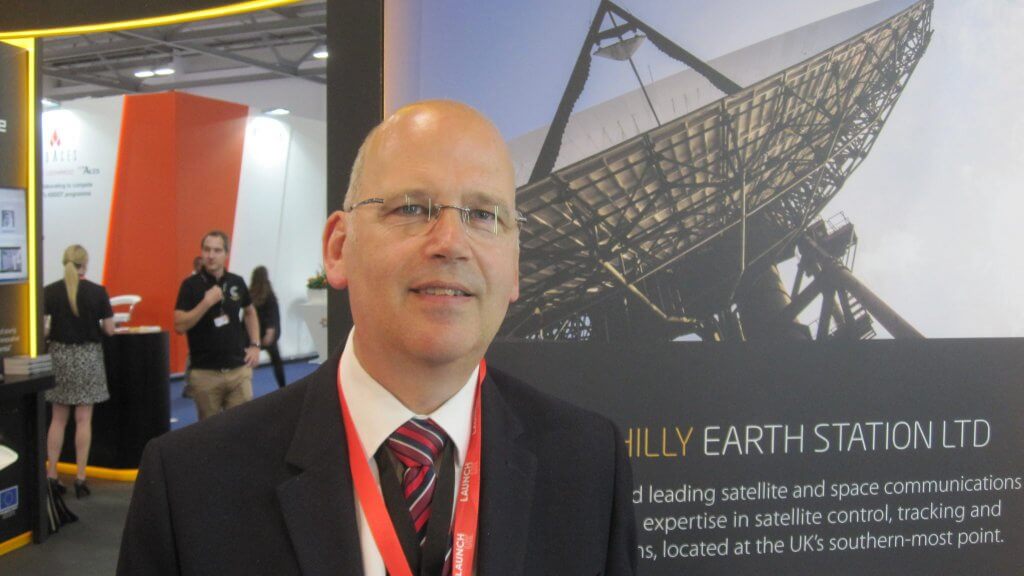 Ian Jones is an unlikely hero. He is mild mannered, with little by way of accent to reveal his North Wales roots. Having graduated as an electrical engineer and moved into satellite communications, Jones found himself, by chance, in a position to save for the nation part of the UK’s early space history: Goonhilly Earth Station.

The station, located on Goonhilly Downs on the Lizard peninsular, is one of the best known and largest satellite earth-receiving stations/teleports in the world with over 60 dishes in total. It became famous when its first receiving dish of 25.9m diameter in 1962, Antenna One, otherwise known as Arthur (many of its dishes are named from Arthurian legend characters), received live television signals bounced off the first communications satellite, Telstar from the US. It went from strength to strength, providing ground station services to the world’s satellite fleets, mainly located in Geostationary Earth Orbit (GEO).

However, in December 2006, BT (British Telecom) decided to shut the site, with the closure to take place in 2008. “BT had pretty much lost interest in satellite communications,” Jones said, as he explained that the industry had moved towards fibre communications or smaller dish receivers.

Forming the company “Goonhilly Earth Station Ltd” as a vehicle to acquire Goonhilly, a two-stage deal was struck with BT, with the firm initially leasing only the antennas. This allowed the fledgling company time to win new business and find an investor. This it did, and by January 2014 it had both the revenue and investment in place to purchase the entire site. Since then the firm has signed contracts with many of the world’s largest satellite operators and with some of its newest, such as Planet Labs.

Goonhilly is now profitable. Revenues for 2017 were £1.8 million with costs “less than that”. Revenues are expected to be five times larger this year. When asked whether his wife worried about risking their own family money to try to save the ground station, Jones replied: “She is very proud of me now.”

He still holds one third of the firm. His shareholding diminished after an equity investment by a VCT (venture capital trust) and, subsequently, in May of this year, via the £24 million private investment of Peter Hargreaves, of the Hargreaves Lansdown investment firm.

Goonhilly started with Antenna One (Arthur), which was built to track the moving communications satellite Telstar in its elliptical low-to-medium Earth orbit. However, the industry soon standardised on geostationary Earth orbit (GEO) for commercial communications satellites, so all subsequent dishes were designed to address this market. Since these only moved by small amounts relative to their location in the sky, the antennas servicing these were not designed to slew at high speeds.

Serving all types of spacecraft in all orbits is seen as the way to add to Goonhilly’s traditional GEO business. For low Earth orbit and other orbit satellite constellation tracking, Jones plans to modify some of the firm’s dishes to allow azimuthal tracking for satellites moving overhead. The station already has dishes 98 and 99, of 5m and 4m diameter respectively, which are fully capable relative to azimuth and direction with more under construction.

While not the largest, these dishes are adequate for low Earth communications as “the spacecraft are closer to the Earth so you don’t need a bigger dish”, said Jones. But Goonhilly wants more of them and is even considering the eventual use of phased-array technology antennas to help connect multiple satellites at a time.

The firm has ambitions to link itself – via cooperation, construction or acquisition of other ground stations in the US and Australia – to provide a full seamless service to LEO constellations

Whether it becomes a “gateway” for LEO constellations or not, for the time being GEO business remains the mainstay of the firm. Starting with SES, eventually all the other major satellite communications satellite operators, Eutelsat, Intelsat, Inmarsat, Hughes (EchoStar) etc, have used and continue to use the station’s services. This is partly because of large-scale positional moves of satellite fleets. Moving satellites needs the security of additional ground stations with large-diameter antennas in case something goes wrong.

“One of the things when you are moving a GEO satellite is the potential for something to go wrong, and your high gain antenna (on the satellite) is pointing in the wrong direction,” said Jones.

“The difference in gain between a high gain antenna and an ‘omni’ (omnidirectional) antenna can be as much as 30dB,” he pointed out, before adding: “So you need to have on the ground the ability get a lot of EIRP into space just in case it’s needed. And that is what we have.” Jones emphasised his team’s experience and ability to trouble-shoot complex problems. “This gives us a competitive advantage and a close, trusting relationship with our customers,” he said.

Goonhilly is on Newquay’s spaceport team but eyes Deep Space

However, it is not just satellites in orbit around the Earth that Goonhilly wishes to serve. While spacecraft tracking will be its main role, the station was part of the team bidding for Newquay to become a spaceport for horizontal launches. Even though GPS repeaters are replacing direct radar returns for location tracking of rocket launches, direct telemetry reception and transmission links will still be needed to ensure range safety.

Likewise, Goonhilly very much sees serving the growing potential of Deep Space communicatons and radio astronomy as part of its future.

After a feasibility study was carried out for the European Space Agency on whether the 32m antenna could become part of the ESA ESTRACK deep space network, the firm won a contract to make modifications to it.

“We have now won an £8.4 million contract with the European Space Agency to equip our biggest dish, the 32m Merlin,” noted Jones. This will make it agile enough to be used for deep space missions for the Moon and Mars.

Goonhilly has also partnered with SSTL for mission support for its SSTL Lunar Pathfinder mission. This is a data relay satellite for use with cubesats operating in lunar orbit.

Using its 32m Goonhilly 6 (Merlin) and its 29.6m Goonhilly 3 (Guinevere) antennas, Goonhilly wants to form its own privately run Deep Space Network from 2020 with other tracking stations around the world. For as humankind ventures into its deep space future, Ian Jones and his Goonhilly Earth Station company definitely want to be part of that. 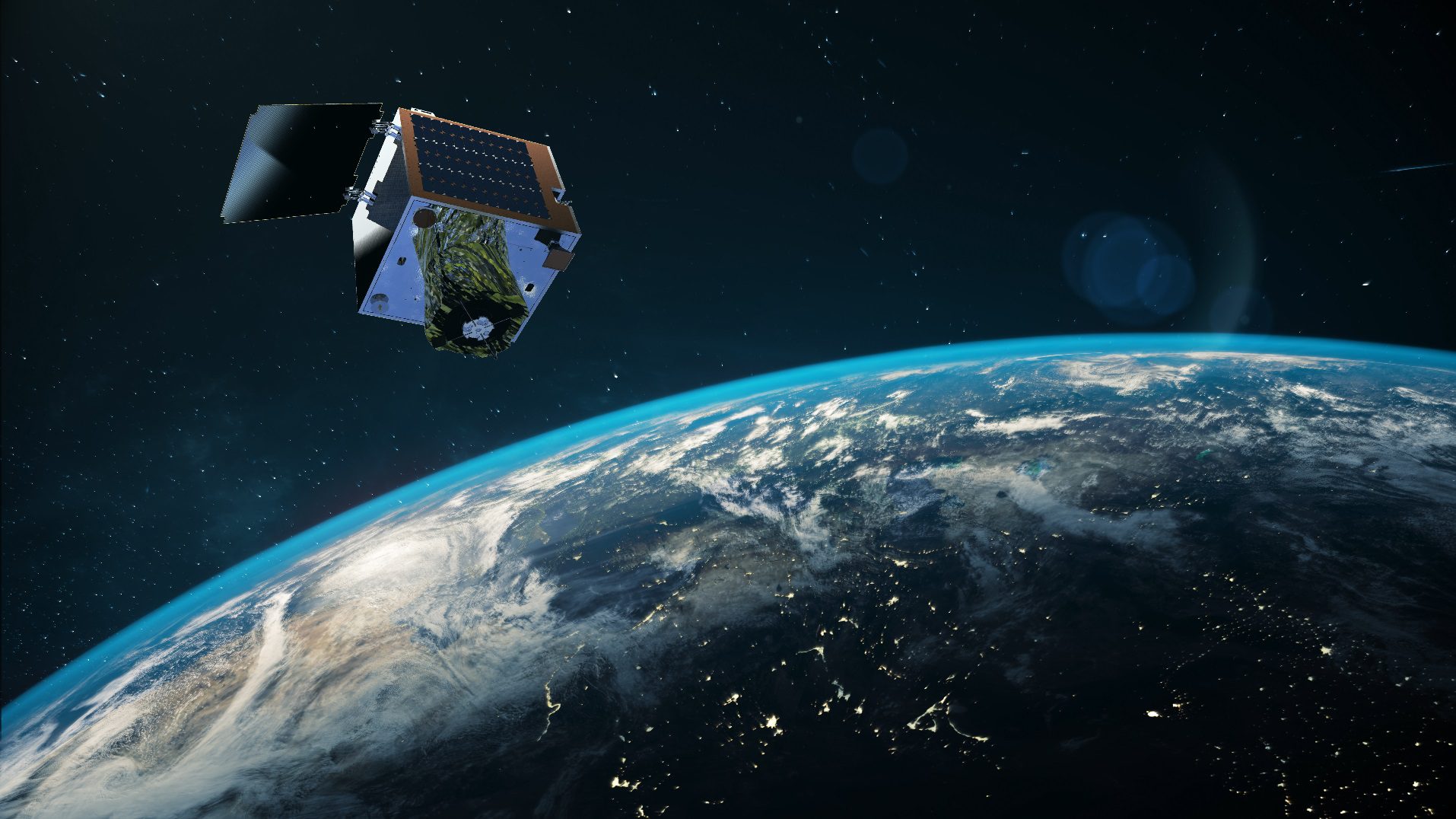