Final score for 2017: 466 – a new record for the number of satellites attempted to be launched in a single year (Corrected)

According to the Seradata SpaceTrak database – the industry standard for the logging of spacecraft launch and orbital events – there were 91 launch attempts to orbit during 2017 – up from 85 in 2016. The standout figure of 2017 was the record number of satellites launched on the 91 attempts: 466, which is the most spacecraft since orbital spaceflight began in 1957. The overall total was more than double the 223 spacecraft attempted to be launched in 2016 and over 150 more than the previous high of 302 in 2014.

Of the 466 spacecraft carried, 37 were classed as being lost or damaged, or had their mission impaired by the launch vehicle or its underperformance (23 spacecraft did not achieve orbit at all). There were no spacecraft related launch failures.

The “cubesat revolution”, in which very small “nanosat” satellites of less than 10 kg are increasingly being used by communications and Earth observation constellations, is behind this rise. Of the 464 total, 289 spacecraft (62%) were in this “nanosat” category.

Number of satellites attempted to be launched in a given year. Source: Seradata SpaceTrak

Of the 91 orbital attempts in 2017, eight were classed as total (6) or partial failures (2), yielding a “raw failure” rate of 8.8 per cent. Even when adjusted for the “severity” of mission loss, the failure rate was still 8.3 per cent – a high figure compared with recent years. This was caused by failures of two new small launch vehicles from New Zealand (Electron) and Japan (SS-520-4) – maiden flights are known to have a high risk of failure. China and Russia had a bad year with a pair of launch failures or partial failures each. These included the Chinese Long March 3B and five rockets and two Russian Soyuz 2 Fregat launches. In addition, India posted a launch failure of its PSLV-XL, while Iran’s Safire 2A (Simorgh) also failed to reach orbit.

The number of orbital launches is expected to rise further in 2018, especially as SpaceX’s partly reusable Falcon launch vehicle operation moves into full swing with three operational launch pads. The firm expects to make even more launches than its record of 18 it achieved in 2017. It was SpaceX’s contribution that helped the US regain its dominant position in launch numbers with 29 orbital attempts. It was followed by Russia with 19 launches, China with 18, France/Europe with 11, Japan with 7 and India with 5. Iran had a single launch as did New Zealand, which was making its debut. 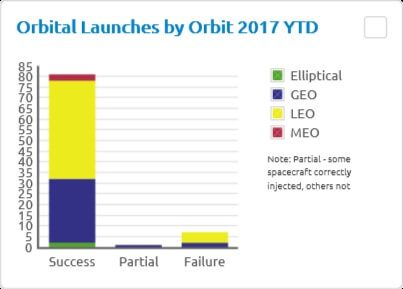 Despite the apparent rise in launch unreliability, space insurers initially appeared to have had a good year, with premium revenues exceeding US$600 million (for both launch and in orbit insurance) and losses of much less than this. The worst loss in dollar terms was the Long March 3B/E launch stranding of the Chinasat 9A/Sinosat 4, which cost insurers US$144 million for partial life loss, as it recovered itself to the correct orbit. The Intelsat 33e thruster placement error was the next bad, costing insurers US$78 million. While 2017 was a profitable year, insurers remain concerned about the stability of the market in an era of low premium rates.  However, in late news Angosat (insured value US$191 million) appears to be out of control.  Meanwhile, in even more worrying news for insurers Viasat 2 appears to have an antenna/beam anomaly.  So far the public announcements about that have been soothing.  But given that its insured value was well in excess of US$600 million, even a partial loss would be a substantial amount.

Updated and added to on 2 January 2018 with correction made for overall number.  Updated again to take account of potential insurance losses on 18 January 2018. Corrected for number on 20 February 2018.

The space launch year showed a large spike in the number of launches with 114 orbital attempts. This was the Read more

Analysis: Despite schedule delays during 2015 the number of orbital launches stayed high

Analysis of the Seradata SpaceTrak launch and satellite database shows that there were 86 orbital launches last year (2015), making it the second highest Read more

2014 was an interesting space year in many ways.  It had elements of great achievement, some notable failures, and confirmed some industry trends Read more

Insane decisions by our competitors

It is unusual, in fact rare, that a Flight publication would ever comment on our US counterpart but even from Read more

NASA: MPLM may stay on orbit, docking rules to change and launch-on-need re-designated? 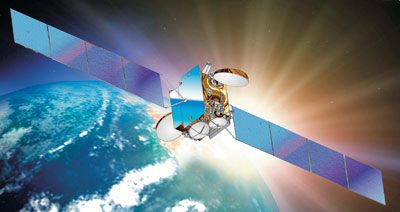